Pope Francis during the ecumenical prayer service in the chapel of the Ecumenical Centre. Photo: Magnus Aronson/WCC

The ecumenical movement came about as a grace of the Holy Spirit, Pope Francis said in a homily at the World Council of Churches (WCC) in Geneva yesterday.

Ecumenism made us set out in accordance with Christ’s will, and it will be able to progress if, following the lead of the Spirit, it constantly refuses to withdraw into itself, he said at a prayer service marking the 70th anniversary of the WCC.

“It might be objected that to walk in this way is to operate at a loss, since it does not adequately protect the interests of individual communities,” he told the gathering, including the Archbishop of Dublin, Diarmuid Martin.

“To choose, in the name of the Gospel, our brother or our sister over ourselves… In the eyes of the world, this often means operating at a loss. Let us not be afraid to operate at a loss! Ecumenism is ‘a great enterprise operating at a loss’.” But this evangelical losing, reflecting Jesus’ words: ‘Those who lose their life for my sake will save it’ (Luke 9:24), is walking in the Spirit. Only in this way does the Lord’s vineyard bear fruit.”

The Pope’s homily focused on the metaphor of walking. “We human beings are constantly on the move,” he said. The metaphor of walking reveals the real meaning of our life, a life that is not self-sufficient but always in search of something greater. Walking is a discipline, he said, demanding effort, patience, exercise and humility “to be prepared at times, when necessary, to retrace our steps”.

It also involves being concerned for our travelling companions, since only in company do we make good progress. “Jesus himself set us the greatest example. He is himself the Way (cf. John 14:6). He left his divine state (cf. Philippians 2:6-7) and came down to walk among us. Our Lord and Master, he became a wayfarer and a guest in our midst.” When he returned to the Father, he granted us his Spirit, so that “we too might have the strength to walk towards him.” Walking in the Spirit means rejecting worldliness.

Pope Francis prayed that the Holy Spirit would strengthen the steps of the World Council of Churches. “Our differences must not be excuses. Even now we can walk in the Spirit: we can pray, evangelise and serve together. This is possible and it is pleasing to God. Walking, praying and working together: this is the great path that we are called to follow today.”

The lack of unity between the Churches was contrary to the will of God, a scandal to the world and harmed the preaching of the Gospel to every creature. “The Lord asks us for unity; our world, torn by all too many divisions that affect the most vulnerable, begs for unity.” 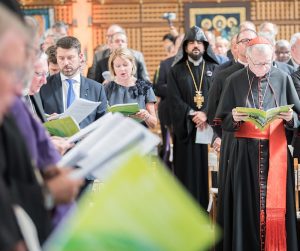 Although the Catholic Church is not a member of the WCC, there is official cooperation at many levels, including a joint working group (JWG) between the Roman Catholic Church and the WCC which was set up in 1965. Currently Archbishop Diarmuid Martin of Dublin is its co-moderator, together with the Metropolitan Nifon of Targoviste. Bishop Brian Farrell, the Secretary of the Pontifical Council for Promoting Christian Unity, was also present at the event.