Working to retain the Eighth gave people courage to speak up 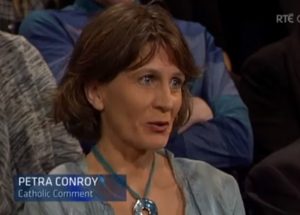 Petra Conroy speaking from the audience during a televised debate.

The referendum on the Eighth Amendment has had the unexpected consequence of giving people the courage to speak up for their faith, according to Petra Conroy, coordinator of Catholic Comment.

In June the organisation put out a call through social media for new speakers.

To their surprise, there was an immediate and generous uptake and over thirty people applied. “About two thirds of the people who applied – we couldn’t take them,” Ms Conroy told CatholicIreland.

Currently, 12 people are going through the Catholic Comment training. The organisation tries to provide authoritative and accurate communicators to the media, who speak from personal experience about church mission and teaching. The idea is that the voices of these ‘ordinary’ Catholics complement the work of church leaders and assist the media in good faith.

“After the Referendum people were saying – ‘Ok, we do have to speak up for our faith, we can’t be hiding’,” said Ms Conroy. “So a lot of people involved in pro life, and who came at that from a faith perspective, felt ‘Well, if I’m inspired by my faith and I feel it’s a great thing and it has values that are good for society but maybe they are not always presented in the best possible way (also because of what the Church did in the past), I’m up for it’.”

The new ‘Catholic voices’ are being put through their paces over several training weekends. This weekend, for example, they will be interviewed during a ‘live media day’ on hot-button topics at the Kairos studio in Maynooth. Most of the group are women and half are aged between 20 and 25.

“They are going through the Catholic voices training to introduce them to the very specific method that we have, which is trying to see the values that underpin somebody who is coming against you. So with what looks like an attack on the faith, and you might be tempted to be defensive, you say ‘What is the value that underpins it?’ And you try to start by connecting to that value and then there’s a space for people to listen,” explained Ms Conroy, who emphasised that this did not mean watering down your own message.

The final training weekend for the new public speakers will be on 4 and 5 August. The public can expect to start seeing some of the new Catholic Comment speakers a week before the World Meeting of Families and during the event.

The organisation only asked the speakers to commit for the period of the World Meeting, but many wish to continue. “Loads of them said they’d like to stay on board and be available to Catholic Comment in the future. It’s very encouraging.”