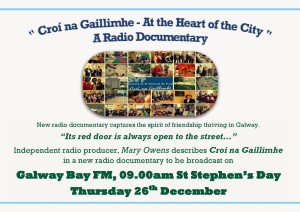 The work of the Society of St Vincent de Paul (SVP) was the focus of a radio programme which aired on St Stephen’s day on Galway Bay FM.

The impact of the Croí na Gaillimhe centre on the lives of more than 400 people was made clear in the many interviews featured in the radio documentary, which was directed by Mary Owens, an independent radio producer.

“What distinguishes Croí na Gaillimhe, in my view, is its success in bringing together people of very different ages as well as social and cultural backgrounds so naturally and enjoyably, in an ever changing and growing city”, Mary Owens said.

One of the weekly activities is the Young Hearts Intergenerational Project. Every Tuesday, transition year pupils from Galway Community College come to Croí na Gaillimhe to work with older adults.

One of the adult participants told the radio programme, “I love the whole atmosphere of the place. The people I have met I would never have met them except coming to Croí na Gaillimhe.”

“They are happy, they may have different languages but they are able to show their friendship in their own way. So friendship, a cup of tea and the whole group together working and laughing, is really what makes it for me.”

The documentary also featured interviews with some of the 70 volunteers, who are described as “the lifeblood of the organisation.”

The centre’s inter-generational and inter-cultural dimension can be heard in the range of voices, accents, stories and points of view in the programme.

While the main running costs of Croí na Gaillimhe are funded by the SVP from the Maureen O’Connell Fund, additional financial support is needed.

The programme can be heard on SVP website: www.svp.ie