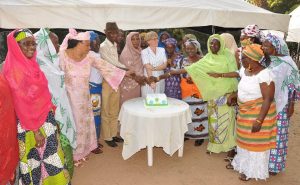 An Irish missionary has been honoured by the Women’s Interfaith Council of Nigeria for her role in setting up their forum which allows Muslim and Catholic women’s associations work together on conflict resolution initiatives.

Sr Kathleen McGarvey is the provincial of the Sisters of Our Lady of Apostles (OLA) in Ireland.

The 49-year-old returned to Ireland from Kaduna in Nigeria to take up this leadership role in late 2013.

Before that she lectured in theology of religions, missiology, interreligious dialogue, and consecrated life at the Good Shepherd Seminary in the troubled city of Kaduna. She was also involved in the Catholic Secretariat of Nigeria’s Commission for Interreligious Dialogue.

On a visit to Nigeria a few weeks ago, Sr Kathleen, who celebrates 25 years of missionary service this year, was honoured by the Women’s Interfaith Council (WIC), an organisation she helped set up in 2010.

The Co. Donegal native did her doctorate in women’s religious discourse and interreligious dialogue. In an interview with The Tablet in 2013, she explained that this research wove together her congregation’s commitment to the promotion of the dignity of women, especially in Africa, and her own particular interest in “mission as dialogue with the ‘other’”.

Having lived in Nigeria when some of the deadliest attacks were carried out by the Islamist Boko Haram group, she firmly believes that religion can act as an agent for peace but she is very aware of the potential fallout from the politicisation of religion.

She joined religious life when she was 21 and within 6 weeks of joining she was sent to Ibadan in Nigeria for a year. Though she subsequently also spent time in the barrios of Argentina and studying in Rome, between 2008 and 2013 she was based in Kaduna.

The Women’s Interfaith Council enables Muslim and Christian women to come together to tackle issues of common concern such as health, literacy, unemployment and violence – both domestic and interreligious.

It is about “building communion”, Sr Kathleen explained in her Tablet interview. “I try to facilitate a platform where women of faith can discuss common problems and confront common issues and share their perspectives and see how to challenge those concerns together. Voicelessness is a thing women here suffer greatly from, so uniting their voices means that their voices are heard.”

Poverty, unemployment and educational disadvantage facilitate the stoking up of religious and ethnic tensions in northern Nigeria.

Instability and the constant threat of violence have resulted in a decline in inward investment to the region, which in turn fuels unemployment and despair, especially among the young.

Africa’s most populous nation is divided roughly along religious lines, with the majority of Christians living mainly in the oil-producing south and a majority of Muslims in the north.

A church bombing in 2012 prompted the Women’s Interfaith Council to gather 200 women from both faiths for an interfaith solidarity prayer meeting and to organise solidarity visits to the injured in hospital.

According to WIC, actions such as these have served to strengthen the resolve of women, leaders and members of faith groups to work together and do what they can to bring reconciliation and peace to Kaduna.

All the women who attend the WIC are the leaders of faith groups at diocesan or state level.

The WIC reaches out to key stakeholders of women’s faith groups, including male religious, traditional and political leaders, about the need for interreligious dialogue and for women’s participation in the same.

It also reaches out to society at large to emphasise the need to collaborate as people of faith.

The group has held many training workshops on conflict transformation and peace building for female faith leaders.

A recent workshop, sponsored by the OLA Province of Ireland, focused on the role of women in preventing children and community members becoming radicalised.