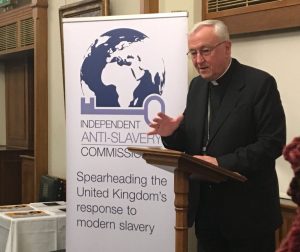 “Well done to all involved in helping these women rescued from modern slavery reclaim their voice and secure convictions of traffickers. Working together we can turn the tide against human trafficking,” he stated.

The three women are residents of Caritas Bakhita House, which is a refuge for women rescued from modern slavery. They gave evidence which helped the successful prosecution of their captors who got sentences of up to 14 years. They were trafficked from Romania to the UK.

The manager of  Bakhita House, Karen Anstiss, praised the courage of all the women in testifying against their captors. She also paid tribute to the work of the staff and volunteers who supported the women through their recovery and helped them look forward to the future with hope.

In the first case two women were forced into prostitution once they were trafficked into the UK. After some time, one escaped and led the police back to the premises to rescue the other woman. The police helped them to find Bakhita House. The women overcame many difficulties and were eventually able to give evidence, leading to two of the men who brought them over from Romania being sentenced to 14 years each and another man being given two years and eight months.

The second case involved a young woman who was trafficked from her home and forced into prostitution. She alerted her mother in Romania who contacted the police who found her at an address in Kensington. The Metropolitan Police, working with authorities in Romania, arrested the traffickers and, with support from Bakhita House staff, the young woman gave evidence which led to her two captors being sentenced to 12 years and four years respectively.

According to the 2016 Annual Report, since opening, 50 people have availed of its services and they came from 24 countries aged between 17 and 66. They escaped sexual exploitation and or assault, domestic servitude, sham marriages, benefit fraud or crime and forced labour. They were trafficked from eastern European countries including Romania, Albania, Slovakia, Hungary, and Poland, African countries including Nigeria, Morocco, Kenya and Liberia and elsewhere in the world such as Brazil, India and Thailand.

On 30th January, Cardinal Nichols also addressed the House of Lords for the ‘Slaves on Our Streets’ report. He highlighted the work of women religious in the global fight against slavery.