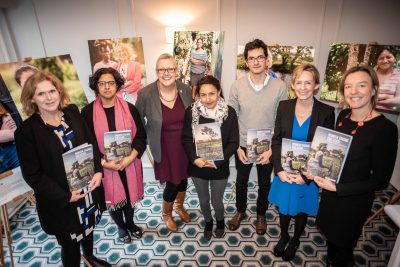 Disasters caused by climate change are estimated to kill 14 times more females than males according to new research published by Trócaire on Tuesday at the start of its Lenten campaign.

‘Women Taking the Lead: Defending Human Rights and the Environment’ details the experiences of a number of women who are or have been engaged in defending their communities against the effects of climate change and corporate greed.

The report highlights how attacks on female human rights defenders are increasing.

Last year, 137 women were attacked for opposing big business and defending their communities. Almost half of all of these attacks were against indigenous women and affected rural communities.

Trócaire CEO, Caoimhe de Barra, who launched the report in Dublin drew attention to the fact that between 2015 and 2018, twelve fossil fuel companies brought at least 24 lawsuits against environmental and human rights defenders.

She appealed to people to help stop this injustice by joining Trócaire’s campaign this Lent.

“Trócaire’s report details the shocking impact of climate change and human rights violations inflicted upon many women who live in countries where we work. Women are disproportionately affected by poverty, which is made worse by the effects of climate change on some of the world’s poorest people. Developing countries carry about 75% of the cost of the climate crisis, but the poorest populations are responsible for just 10% of global carbon emissions,” she said.

Caoimhe de Barra noted that “Around the world, women face huge risks in standing up for their rights in the face of injustice perpetrated by big business taking advantage of vulnerable communities. The threat of assault and murder is a daily reality for many of these women, who are fighting for their families to live better lives.”

“This year, Trócaire’s Lenten campaign will help support women around the world who are struggling to protect their families from intimidation, violence, hunger and drought. By contributing to our Lenten Appeal, people in Ireland will be providing vital aid, care and support to these brave women,” she explained.

The launch was also attended by Bertita Zúñiga Cáceres, leader of the Civic Council of Popular and Indigenous Organisations of Honduras (COPINH). The organisation is supported by Trócaire.

Bertita’s mother, Berta Cáceres, was an internationally renowned activist and winner of the environmental Goldman Prize. She was shot dead in 2016 after a long battle to stop construction of an internationally financed hydroelectric dam on the Gualcarque river in Honduras, which the indigenous Lenca people consider sacred. She is one of the report’s case studies.

Bertita Zúñiga Cáceres spoke about her own experience of violence inflicted on female human rights defenders and the indigenous community’s long struggle to defend their land from corporate abuse.

While she continues the work of her mother, Bertita is also seeking justice to ensure that all those responsible for the murder – the company executives and state officials identified during the resulting trial – are prosecuted.

“Trócaire supporters in Ireland have helped us by giving visibility to the fight for justice, as well as financial support. This will help to keep the work going in the search for justice and in defence of all human-rights defenders and indigenous communities,” she explained.

“I believe that we deserve a life of justice, freedom and peace. We want a country that recognizes indigenous peoples and the diversities that make up Honduras – a country built according to Honduran needs and not those of companies.”

The report highlights how the past decade was the hottest on record.

The number of people displaced by sudden onset climate and weather-related disasters averaged 22.5 million persons per year over the last decade. Global hunger is also on the increase after a decade of steady decline, with climate change a key driver.

In Southern Africa alone, 45 million people are food insecure in 2020 as a result of climate change, the cumulative effects of recurrent widespread drought. This is all at today’s level of warming of 1°C above pre-industrial levels.

The report also highlights how globally women face patriarchal structural inequality and systemic discrimination as well as social, economic and political barriers that limit their ability to adapt and to influence in relation to climate change.

The same factors result in women being more vulnerable to the direct and indirect impacts of climate change.

One study, which collated data and case studies from over 1,000 sources documented extensive direct links between environmental pressures and gender-based violence.

Climate change will exacerbate and entrench existing gender based inequalities, unless policies, laws, norms and practices, and finance flows are addressed to ensure climate action instead furthers the gender equality and women’s empowerment agenda. At the heart of this is women’s participation in decision-making.

Worldwide less than 13% of agricultural land is owned by women, making them more vulnerable to eviction. Today, women around the world will spend a collective 200 million hours collecting water.

Most of the 3.9 billion people who are offline are in rural areas, poorer, less educated and tend to be women and girls.17 About 327 million fewer women than men worldwide have a smartphone and can access mobile Internet.

According to the report, ‘Women Taking the Lead: Defending Human Rights and the Environment’ gender equality, climate justice and corporate accountability are inextricably linked – while climate change and corporate abuses impact women disproportionately and erode gender equality, the role of women as active participants in policy decisions and in implementing the practical solutions to climate change and corporate accountability is key to achievement of development goals, and climate and environmental breakdown.

The paper explores opportunities for accelerating action on the interlinked issues of gender equality, climate justice and corporate accountability through the examination of policy opportunities drawing on women’s experience across Trócaire programmes.

It finds that renewable energy projects represent a growing threat to human rights, with 47 documented attacks on human rights defenders in 2019 related to renewables.

In addition, human rights defenders are being subjected to undue criminal prosecution and judicial harassment due to their role in protecting the environment, including criminal charges, arbitrary arrests, detentions, and strategic lawsuits brought by companies.

Between 2015 and 2018, 12 carbon majors (active fossil fuel producers that are the largest corporate contributors to greenhouse gas emissions) brought at least 24 lawsuits against 71 environmental and human rights defenders for a total $904m of damages.

This paper is a call to action for governments, in particular the Irish Government, which has made gender equality, climate change and good governance priorities in the international development policy ‘A Better World’, to stand behind, support and enable all women to become empowered, and to ensure gender-sensitive decision making at all levels on the issues affecting women’s lives.

It calls on Ireland to:

• Increase its current annual climate finance allocations approximately six fold, alongside fulfilment of ODA commitment to deliver 0.7 by 2025, to deliver its fair share of current joint donor climate finance commitments. As a champion of gender equality, climate and good governance, Ireland should scale up finance for climate action interventions dedicated to targeting transformative impacts for women, including funding for grassroots and women’s organisations to empower local civil society and to complement the large financing mechanisms.

• Increase its climate finance allocations, bilaterally and multilaterally, in transformative, systems approaches such as agro-ecology which can realise social, economic and environmental dividends, with a focus on women small scale farmers and producers.

• Continue, through Irish Aid, its efforts to strengthen mainstreaming of gender-responsiveness and empowerment of women in its climate action programming, and work to increase its capacity, and the capacity of its partners, to plan, monitor and report against this objective.

• Continue to champion gender equality and women’s full participation in action and decision-making as a policy priority in the UNFCCC and within all environmental agreements.

• Lead by example, ensuring that Ireland’s national mitigation and adaptation plans are gender responsive and developed with the full and meaningful participation of women, including marginalised women and women living in poverty, and champion this approach within the EU and with bilateral programme country partners.

• Advocate the mandatory inclusion of gender-responsive funding guidelines, gender-disaggregated data to measure how funding is used, and gender audits of funding portfolios, within all UN and non-UN Climate Funds.

It calls on the Northern Ireland Executive to:

• Deliver on the commitments made in ‘New Decade, New Approach’ by urgently bringing forward legislation for a Climate Act. The act should have an integrated all-of-government approach to reducing emissions and ensure the transition to zero carbon is just, orderly and benefits the poorest and marginalised members of society by integrating strong social measures, gender responsiveness and human rights principles and safeguarding mechanisms. Ultimately this act is the best mechanism to ensure Northern Ireland does its part in the UK reaching ‘net zero’ greenhouse gas emissions by 2045.

• Urge the UK Government to support and protect environmental human rights defenders, with a focus on women, in relevant international human rights and environmental fora. This includes delivering on its pledge in the guidance on UK Support for Human Rights Defenders to use all routes to create stronger global standards.