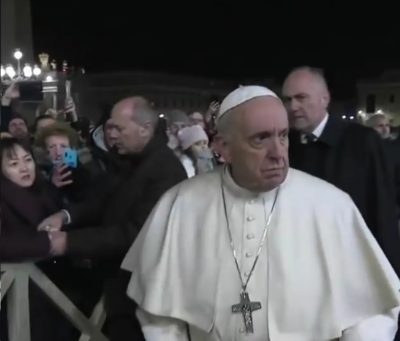 The Pope has apologised for losing his patience on New Year’s Eve when he struck a woman on the wrist after she had grabbed him by the arm.

The incident occurred when the Pope was greeting children in a St Peter’s Square walkabout after he had visited the Vatican City’s crib of the nativity. While he had his back turned to the crowd, a woman leaned across the security railings, took hold of the Pontiff’s arm and pulled him towards her.

Live video of the event, broadcast by Vatican Media, showed that the Pope was clearly caught off guard by the woman’s actions.

As the 83-year-old is yanked by the wrist, he is forced to fully extend his arm: he nearly loses his balance and is at risk of falling to the ground.

When the woman didn’t immediately release her hold of the protesting Pontiff, Pope Francis slapped her twice on the wrist to escape from her grip.

Immediately afterwards, it is clear from the video footage, the Pope was upset by the incident.

The following day, before giving a scheduled New Year’s address condemning violence against women as “blasphemy”, the Pope apologised for his actions.

“Love makes us patient,” he said. “So many times we lose patience, even me, and I apologise for yesterday’s bad example.”

In the address, Pope Francis said: “Women are sources of life. Yet they are continually insulted, beaten, raped, forced to prostitute themselves and suppress the life they bear in the womb.

“Every form of violence inflicted upon a woman is a blasphemy against God, who was born of woman.”

Five years ago, there was some controversy concerning remarks made by the Pope that appeared to condone the smacking of children by parents, when he said it was all right for a father to “correct with firmness” a child who was misbehaving, providing that the child’s dignity was preserved.