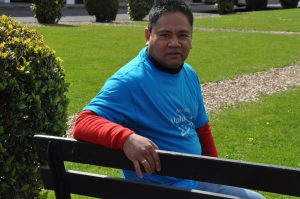 Jinny Malazarte from Dublin who became the 2,500th volunteer to register to help out at WMoF2018 in Dublin in August.

Organisers of the WMoF2018 celebrated another milestone on Saturday when the 2,500th volunteer registered to offer his services for the international church event which takes place in Dublin in August.

Jinny Malazarte from Drimnagh in Dublin, who is originally from the Philippines but has been living in Ireland for 17 years, registered along with his wife.

Speaking about his volunteer role with the WMoF2018, he said, “As soon as I realised that the WMoF2018 was coming to Dublin, I was interested in volunteering for it. The preparations that go into an event like this are meticulous – the organisers have to think of everything including offering the famous Irish welcome to those who will come to Ireland for the event.”

He said he was looking forward to being part of the team welcoming the world to Ireland for the global faith event.

“I hope to be part of all the different events and to work with many of the volunteers that I have come to know these past weeks and months. It’s going to be a huge team effort.”

“It has been really inspiring to see how many people are willing to make a contribution to an event like this – to just give of their time and talents. It’s going to be an amazing event for all those who attend and while I am going to be really busy as part of the volunteer team, I know that I am going to gain a once in a life time experience from it.”

Last Saturday, more than 800 volunteers from the four corners of Ireland came together at the RDS in Dublin as part of an induction day for volunteers who have signed up to be part of delivering the WMoF2018 events from 21 – 26 August in Dublin.

Fr Timothy Bartlett, Secretary General of WMoF2018 paid tribute to the volunteers saying they are “at the front line of everything we will be offering at the WMoF2018 and we could not deliver an event like this without them”.

He said that while WMoF2018 organisers were delighted to have reached the 2,500th milestone in volunteering numbers, they would need thousands more volunteers to join.

He invited people to sign up at www.worldmeeting2018.ie “to be part of this historic event.”

Dublin was chosen by Pope Francis to host the 9th World Meeting of Families and the theme of the gathering is ‘The Gospel of the Family: Joy for the World’.

Held every three years, this major international event brings together families from across the world to celebrate, pray and reflect upon the central importance of marriage and the family as the cornerstone of our lives, of society and of the Church.

Whilst WMOF2018 will include exhibitions, cultural events and musical performances, events around the city, gestures of solidarity, it has at its heart the following key moments:

Firstly, a National Opening of World Meeting of Families will take place simultaneously in the twenty-six dioceses on the island of Ireland on Tuesday 21 August.

Secondly, from 22 to 24 August, a three-day Pastoral Congress will take place in the RDS, Dublin and will include entail a joyful and reflective programme of workshops, talks and discussions centred on the theme: “The Gospel of the Family: Joy for the World”.  The Congress will also offer an engaging programme for young people to include faith and fun activities for children.

Thirdly, a Festival of Families will be held on Saturday 25 August 2018 in Croke Park, Dublin.  This will involve a cultural concert within a prayerful and joyful atmosphere, during which personal stories of faith will be shared by families, each representing the five continents. Pope Francis will be present for this event.

Fourthly, the Closing Mass for WMOF2018. A solemn Eucharistic Celebration on Sunday 26 August will involve thousands of pilgrims from Ireland and around the world in the Phoenix Park, Dublin. Pope Francis will be principal celebrant of this Mass.