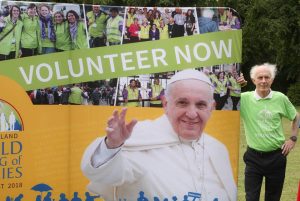 Organisers of the World Meeting of Families’ Pastoral Congress in the RDS from 22-24 August have announced that they have closed off single day registrations for the event due to the level of demand for places.

In a tweet published on the day the Pope’s official itinerary was announced for his two-day visit to Ireland, the WMOF2018 office announced that there were still three-day registrations available but “we are going to be sold out soon”, the tweet warned.

WMOF2018 Secretary General, Fr Timothy Bartlett, described Monday as “a landmark moment” with the announcement of the official itinerary of the Holy Father.

“We have the highest number of children under 18 coming to this event – almost 6,000 registered. We have had to redesign our children and youth programme because of the numbers. It is also very clear that young families are coming, and the largest demographic in the registrations (26%) so far are parents aged 29-42 with their children,” he said.

According to Fr Bartlett, the Dublin event has the highest number of international registrations for any World Meeting of Families with 110 countries represented so far.

“These are all tremendously positive signs at this stage, two and a half months out from the actual event,” the Down and Connor priest said.

On Monday, information relating to the pastoral programme for the World Meeting of Families Congress at the RDS was also published along with the Pope’s itinerary.

Fr Bartlett highlighted that of the 200 individual presenters that have been announced in the congress programme, 91 are lay women, 65 are lay men and 44 are clergy and religious.

“This is a lay – men and women – led programme. The largest group of presenters are couples – so it is a couples’ led programme and that is how it should be when you are talking about family and family life.”

Fr Bartlett told Catholicireland.net that other people will be announced as speakers over the next few weeks and other strands will also be announced.

“We may announce an additional symposium and announce something in Belfast in relation to peace and the family,” he said.

The priest added that he believed it was important for the event to be focused on “real families and real couples”.

“We didn’t want to go for specifically big celebrity names – some of them may be – but that is not the objective. It is people who have some experience, background and reflection or who simply are couples with children.”

“In some cases, we want families as families – families dealing with special needs and those responding to members who are LGBTI+. We want people to respond to those issues and to share their experience.”

Asked about the conservative backlash against Jesuit Fr James Martin, who has been selected as one of the keynote speakers for the WMOF2018 congress, Fr Bartlett said, “I think it was always the position of those organising the event that it should reflect the totality of the conversation that is going on within the church at the moment, particularly in the light of Amoris Laetitia.”

“Someone like Fr James has a proven record of addressing that very challenging and sensitive issue of how we help people who are in our church community who are LGBTI+ and who are part of the church family: how we make them feel reassured and that they are welcome.”

“This difficult tension is not unique to the catholic church but to all Christian churches: how do we respond to the unequivocal teaching of the scriptures and the tradition of the church in relation to the nature of marriage?”

“There is no point in pretending that that is an easy issue for any party within the church but we certainly have to look at how we can live out the balance between holding to the truth and also the truth of who we are – and that is a broken imperfect family of families in the church.”

“How do we help each other to walk together in love, compassion, solidarity, strengthening each other and listening to each other respectfully and trying to understand why the other feels either the anger or the disillusion that they do. There are real tensions that we need to work out as a Christian family together.”

“Nobody is going to resolve any of these issues at the World Meeting of Families but it was always the view of the organisers that the fulness of those issues and conversations should be represented.”

The Pope’s apostolic exhortation Amoris Laetitia is the guiding theme of the World Meeting of Families congress.

Cardinal Sean O’Malley of Boston, President of the Pontifical Commission for the Protection of Minors, will lead a round table discussion on Friday 24 August on safeguarding children and vulnerable adults. Panelists joining him in the discussion will include clerical abuse survivor, Marie Collins, and professor of psychiatry, Baroness Sheila Hollins.

This is the first time safeguarding has been chosen as one of the issues addressed by a World Meeting of Families congress.