A fly-on-the-wall-style documentary about the visit of Pope Francis and the World Meeting of Families (WMOF) 2018 is to feature on RTÉ on New Year’s Eve.

Over an eight-month period, WMOF2018 opened its doors to Moondance Productions to film behind the scenes people and preparations.

The resulting 60-minute documentary shows WMOF through the eyes of clergy, event managers, volunteers and Gardaí – everyone from Archbishop Diarmuid Martin to the master of ceremonies to the person who ironed the vestments for Pope Francis.

WMOF organisers state in their Christmas newsletter that the documentary records the “momentous” Papal visit to Ireland. They commended the many staff and volunteers who worked in the background and stated that the documentary “only represents a small percentage of all the work done. We are certain that it will remind you of Pope Francis in Ireland and we hope that you enjoy it.”

Moondance Productions – producers of documentaries on Dublin Zoo and the Irish Defense Forces – had “unprecedented access” to what it called the “notoriously guarded institution” of the Catholic Church, which through the Archdiocese of Dublin granted access to a world which “hadn’t been seen on Irish TV” before.

“We filmed in the months leading up to it and from the day [Pope Francis] arrived. That is captured and the highs and lows, the anticipation and the preparation for the event and then Croke Park and the days in the RDS and the papal mass,” Ciara Nic Chormaic, Producer, Moondance Productions told CatholicIreland.net.

What struck her most in the making of the film was the scale of what had to be planned for and the work that went into it.

“It was the biggest event in Europe that they were planning for on the Sunday. So it interesting to get the Garda perspective on that and the security and all the meetings that took place between the Department of An Taioseach and the Gardaí and the WMOF – there is so much that goes into making something like that happen, and I think that is what is interesting for the viewer,” she said. 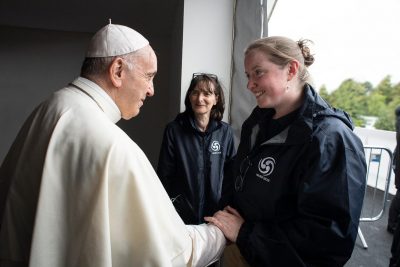 The documentary was directed by Shane Brennan at Moondance Productions Ireland.

The film makers state that 39 years after a pope last visited Ireland and “in a country rocked by scandal after scandal within the Catholic Church, this visit was always going to be a contentious one. Pope Francis in Ireland goes behind the scenes with those tasked with making the Papal visit a success, against all the odds.”

Archbishop Diarmuid Martin’s team, led by the secretary Fr Tim Bartlett, the General Manager, Anne Griffin, and the Media and Communications Director, Brenda Drumm, were filmed as they prepared for the event.

Pope Francis in Ireland follows several others, including Fr Damien McNeice, the Master of Ceremonies for the event, Johnny Donnelly, the Creative Director of the Papal Mass, and Coleman Moore, a volunteer at the event whose claim to fame was to iron the Pope’s vestments.

Documentary makers filmed from the Assistant Commissioner Pat Leahy’s shoulder as he led his team in the central command unit, and they were in the air with the Garda helicopter and in the Phoenix Park Control Centre with Chief Superintendent Finbarr Murphy on the day of the Papal Mass.

They describe the documentary as “a unique take on Pope Francis’s trip to Ireland, from the inside out,” and state that it is not a religious programme but rather an observational look at how the “ambitious” event was realised, capturing the sense of both anticipation and trepidation as the D-Day drew near.

The documentary will air on 31 December 2018 at 7 p.m. on the national broadcaster RTÉ One. Those living abroad will be able to view the documentary on the RTÉ Player from 1 to 7 January.