Home > News > Wish others a ‘hope-filled’ Christmas and New Year

Wish others a ‘hope-filled’ Christmas and New Year 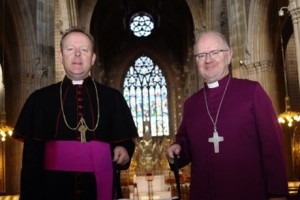 The country’s most senior Christian leaders have issued a joint message appealing to all to make hope their theme this Christmas and New Year.

In their statement, the Catholic and Church of Ireland Primates of All Ireland, said people now seem to find it difficult to feel real hope for the future, for the world, and even for themselves.

“Hope is indeed a rare commodity and people are sometimes cautious about wishing for too much hope, lest they be disappointed.”

Archbishop Eamon Martin and Archbishop Richard Clarke said that in the world around us, with all the violence and destruction of recent weeks and months, “there seems to be little interest in any scenario of hope”.

But they cited Nobel Peace Prize laureate, Archbishop Desmond Tutu, who said, ‘Hope is being able to see that there is light despite all of the darkness’ and also recalled Pope Francis’ call not to allow ourselves to be robbed of hope.

“Hope is the opposite of despair and yet it is more than simply a desire for something better. Hope is a fundamental Christian quality, but it is never an individualistic thing. We should not wish simply for hope for ourselves, that things will turn out well for us or for those we like or love,” the two church leaders said on Tuesday.

“Hope is something we are called to bring into the world in the name of Christ. If we are to be people of hope, we are also to be agents of hope.”

“When we follow the call of Christ and seek to bring hope into the lives of others – material as well as spiritual hope – we then have grounds for real hope. What we do for others – in simple ways, or sometimes demanding ways – is sowing hope for the future.”

The two Church leaders said that around the country, there are those who can feel no hope for themselves or their families, whether through deprivation or because they are refugees from violence. They urged people to become envoys of hope in the name of Christ, who was born in a stable in Bethlehem.

They concluded by stating that just as Jesus came into the world to bring hope into places of despair and light into the midst of darkness, so also can we become people of hope. “Perhaps this year we can with sincerity wish others a hope-filled Christmas and New Year.”

Separately, the Church of Ireland Archbishop of Dublin & Glendalough, Archbishop Michael Jackson also issued his Christmas message on Tuesday and said that reflecting on the year soon to draw to a close, some “might be thinking of the horrific conflagration at the Halting Site in Carrickmines on the outskirts of Dublin, the death of Garda Golden in Omeath or a personal loss”.

“You might think of the refugees fleeing from Syria and from other parts of the Middle East and the forgotten peoples of Africa who continue to flee.”

“You might think of attacks in Paris, Beiruit, America and Mali. You may see a flicker of grace and hope, of human dignity and spirit among those who have suffered most and lost most and who still give to others – darkness and light.”

Archbishop Jackson said all can benefit from making a little time to reflect on darkness and light, on light and darkness, the cycle and the succession of time.

“Our hope, particularly as we approach Christmas, is that the proportion of tangible light and brightness will increase as, in the words of the Christmas Gospel the darkness does not overcome it.”

He continued, “This is not optimism, this is hope; this is the Kingdom of God in our midst. This is frequently ground out in humility and in degradation, in goodness and in glory; this is the presence of God at the heart of pain and suffering – in the Middle East, at Borders throughout Europe, in homelessness, destitution, grief and poverty in Ireland. This is our world and it is God’s world, held together by God’s love.”