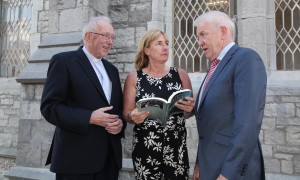 Migration policy will never be successful unless it addresses the needs of those who are migrating, the Chair of the Bishops’ Council for Emigrants said on Thursday evening.

In his address at the launch of Welcoming the Stranger – Irish Migrant Welfare in Britain since 1957 by Dr Patricia Kennedy, Bishop John Kirby said the book shows that policy which endures starts with the people it serves.

“We can see from many current crises that no amount of policy will deter people from migrating,” the Bishop of Clonfert said.

He added that the mind-set of policy-makers “must include the lives of migrants otherwise policy won’t work and will create backlogs, illegality and unrest”.

Elsewhere in his address at the launch at St Lorcan’s chapel in Dublin Institute of Technology’s Grangegorman Campus, Bishop Kirby suggested that the emigrant has to occupy a space in the heart of the people of Ireland.

“The lesson from this book is that the more isolated emigrant or diaspora groups become; the less effective they are on behalf of those they serve,” he stated.

“New energy and fresh imagination has to be brought to bear on the way that Irish people abroad relate to their homeland for the good of both.”

Referring to the experience of Irish emigrants in Britain, the bishop noted that while they were not without stigma in some of their host communities, Ireland was fortunate that the Irish who travelled to Britain didn’t have to worry about visas or quotas.

“They didn’t have to declare as refugees and asylum seekers though many were economic refugees and some may have fled persecution of one form or another. The freedom of movement between Ireland and Britain meant that people could concentrate on work, housing, family and security. When work dried up our migrants moved on, some to different cities throughout Britain, others became part of a second wave of emigration to other countries,” he explained.

He compared the situation many migrants face today compared to the unrestricted movement of people between Britain and Ireland. 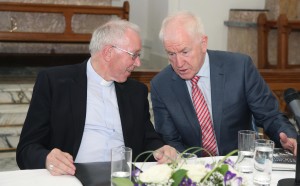 “As many countries today become preoccupied with negative depictions of immigration there is merit in pondering how the unrestricted movement of people between Britain and Ireland has, for the most part, benefited these islands. There were many hazards for our people who emigrated across the Irish Sea, but that freedom of movement opened wonderful opportunities for those who took the risk.”

“Today it would be remiss of us not to think of those who travel across the Mediterranean Sea and in doing so put their lives in danger. Though emigration should never be justified as a tool of economic policy, one can only be grateful for the freedom of movement that exists between Britain and Ireland, and wonder what can policy-makers learn in this regard in the wake of ongoing human tragedies off the coast of Southern Europe?”

Minister for the Diaspora, Jimmy Deenihan, in his address at the book launch paid tribute to the role of the Irish episcopal conference in requesting the Irish government to look at their emigration policy.

A taskforce was set up to look at how Ireland should respond in a more positive light to the challenges facing emigrants around the world and greater emigrant support followed.

Minister Deenihan noted that since 2004 the Irish Government has spent over €60 million in the UK alone on giving support and welcome to Irish emigrants and services to them.

“Some of the services in the UK are mostly funded from Dublin and even in the hard challenge of the economic times of 2008-2012, that funding was continued and wasn’t reduced to any great extent and emigrant groups around the world appreciated that. It made a statement that despite all the challenges here, we still have concern for all of our emigrants especially those challenged in various ways,” the Minister said.

Elsewhere in his keynoted address, Bishop Kirby said Welcoming the Stranger is “filled with stories of giants, people who contributed hugely to the welfare of our emigrants at a time when there was little interest from official Ireland”. 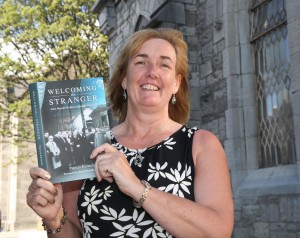 In the book Patricia Kennedy tells the untold human story of how the Catholic Church has met the welfare needs of Irish emigrants in Britain since the 1950s. Based on personal interviews and newly discovered archive material ‘Welcoming the Stranger’ offers a unique insight into how Anglo-Irish relations impacted on emigrants coming to Britain. Pic John Mc Elroy.

Among those he paid tribute to were Nuala Kelly,  Bishop Éamonn Casey and Fathers Paul Byrne and Bobby Gilmore.

“The work of the religious congregations of the Columbans and the Oblates, as well as the Legion of Mary, shine out in the text.”

“The application of Catholic social teaching underpinned many of their campaigns. Issues of housing, miscarriages of justice and the care of members of the Travelling community were – and still are – challenging, but especially so during the climate of the Troubles.”

He added, “The work of many religious sisters, the development of the Irish Chaplaincy and the support offered in difficult times, the courageous human rights campaigning of solicitor Gareth Peirce, and of barrister Michael Mansfield, all feature in this book.”

The book highlights the importance of supporting emigrants maintaining contact with their homeland; the importance of providing assistance to new emigrants; placing people at the heart of migrant policy; and, encouraging the work of integration, Bishop Kirby said.