Home > Featured > Welcome and reservations for measures in Budget 2019 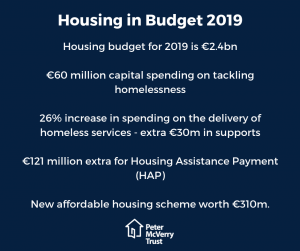 The Peter McVerry Trust housing and homeless charity has welcomed measures announced in Budget 2019. The charity said that measures outlined by the Minister for Finance and Expenditure, Paschal Donohoe TD, would ease the huge pressures on the housing system and welcomed the Minister’s prioritisation of the needs of vulnerable people.

The Society of St Vincent De Paul (SVP) also welcomed the budget but with reservations. Kieran Stafford, SVP National President, said: “While many of the measures announced today will help families who are struggling, much remains to be done in the areas of education, housing and childcare so that individuals and families can get out and stay out of poverty.”

He added that the effects of years of austerity and under-investment in public services continue to be felt by individuals and families being assisted by SVP. Many of the families who took part in recent research, Stories of Struggle, were hoping for measures that would offer more secure and affordable housing, and supports for education so their children could participate fully in school and eventually find their way out of poverty. They also wanted affordable and quality childcare so that they could enter employment or increase their hours.

“Today was a step in the right direction, but we have a long way to go,” said Kieran Stafford. 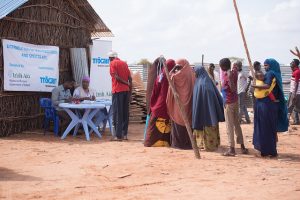 Misean Cara, which represents missionaries and those involved in overseas aid, welcomed the increase of €110 million for the overseas aid budget, described as “the most significant increase in ODA in a decade”, and an “important step on the road towards Ireland’s achievement of its UN commitments” on international development spending.

This increase is expected to bring Ireland’s ODA to 0.39 per cent, which allows for a solid trajectory towards the international target of 0.7 per cent as a vital means of supporting the Sustainable Development Goals.

However, there was criticism from environmental organisations that there was no increase in carbon tax in the budget to facilitate meeting Ireland’s efforts to mitigate climate change. Trócaire welcomed the increases in overseas aid, but said that the budget was announced at a critical moment for furthering climate action and it is therefore “extremely surprising and disappointing” that the government has ignored the argument made by the Citizens’ Assembly on Climate Change, the ESRI and the Climate Change Advisory Council for an increase in carbon tax.

– €60 million capital spending specifically to provide homeless services that enables local authorities and NGOs to increase emergency accommodation, which can subsequently be turned into social housing units
– 25 per cent (€30 million) increase in spending on delivery of homeless services across the country
– €121 million extra for Housing Assistance Payment (HAP), which is necessary while social housing is being built.

– Income adequacy measures such as the increase in the rate of the qualified child tax credit, higher rate of social welfare and full restoration of the Christmas Bonus payment. However, the increase in the earning disregard for one parent families may not help those on the increased National Minimum Wage.
– Education boosted by a €25 increase in the Back to School Clothing and Footwear Allowance. However, schools will continue to ask parents to pay substantial ‘voluntary’ contributions because of the failure to restore capitation rates to 2010 levels in Budget 2019. Nevertheless, the 5% increase is positive.
– Housing funding does not increase the limits for Housing Assistance Payment (HAP) and Rent Supplement.
– Energy bills will be helped by the extension of the fuel allowance to 28 weeks. However, increases in energy prices will hit those living on low incomes in poorly insulated homes. The fuel allowance is still 21 per cent lower than 2010 in terms of purchasing parity.