Home > Featured > Weekend’s ordination in Oranmore is a first for Co. Galway parish 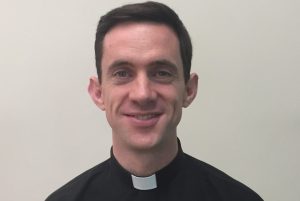 Bishop Brendan Kelly of Achonry will preside at the first ever ordination in the Co. Galway parish of Oranmore when deacon Declan Lohan is ordained a priest for service in his home diocese of Galway, Kilmacduagh and Kilfenora.

The ordination takes place at 3pm on Sunday at the Church of the Immaculate Conception and will be attended by up to 60 priests. The music for the liturgy will be a collaboration between the choirs of Oranmore and Maree.

He studied for a degree in Arts and Law at NUI Galway after school.

His parents Matt and Mary Lohan, from the Coast Road in Oranmore, run a woodwork and joinery company at Carnmore.

After a gap year teaching English in China, Rev Lohan studied law at King’s Inns, Dublin and qualified as a barrister in 2008, going on to practise in both criminal and civil law at the Four Courts in Dublin and on the Western Circuit.

In his spare time prior to entering seminary he worked as a volunteer with the Legion of Mary and with Youth 2000 in Dublin, Galway, England and France.

Rev Lohan began his training for the priesthood in 2007 in Toulon, France, returning to complete his studies at St Patrick’s College, Maynooth.

Speaking ahead of his ordination this weekend, Rev Lohan said, “choosing the path to priesthood has made me deeply happy.”

Canon Michael McLoughlin, the diocesan administrator in Galway, Kilmacduagh and Kilfenora, said the day would be “hugely important” for Declan, for his family, for Oranmore, for the Diocese and for the Church.

“We rejoice and we are glad. I pray that Declan will find joy and fulfilment in the service of God and the service of the people of God. I ask that they would embrace him, make him welcome and keep him in their prayers.”

Newly ordained Fr Declan is due to offer his First Mass in Oranmore Church on Monday 24 July at 7pm.

After his ordination Father Declan will await his first appointment as a priest of the diocese, which will be taken up in mid-August.

Last July, 27-year-old Daniel Gallagher from Bohermore was ordained to the priesthood by Bishop Martin Drennan of Galway at a ceremony in St Patrick’s Church in the centre of Galway City.

It was the first time that an ordination to the priesthood had been celebrated in that church.