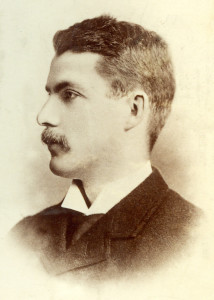 A new website dedicated to honouring the renowned Irish Jesuit, Fr John Sullivan, was launched to coincide with his birthday anniversary mass in Clongowes last Sunday.

The website features photos and videos on the life of John Sullivan SJ and the popular devotion to him.

In one section, the Church of Ireland Archbishop of Dublin and Glendalough, Dr Michael Jackson, speaks about the ecumenical importance of Fr Sullivan, who was raised in the protestant tradition of his father.

In a series of podcast interviews, Jesuit Communications Manager, Pat Coyle provides an insight into the John Sullivan archive in Clongowes, where Vice Postulator for his canonisation cause, Fr Conor Harper SJ, relates the stories of various artefacts there including a book mark made from Fr John’s first curls – the only first class relic there.

She also speaks to Fr Bernard McGuckian SJ who recounts stories of the miracles and cures associated with the ‘Servant of God’.

The prayer room on the website features the novena prayer accompanied by a moving instrumental ‘The Father John Sullivan Air’, composed by pianist and songwriter Eamon Keane.

Visitors to the site can also submit a prayer request or acknowledge favours received through the intercession of the Jesuit whom the boys he taught called ‘The Saint’.

Before Mass on Sunday, Pat Coyle thanked a family who gave a very generous donation for the building of the website, saying they were present in the congregation but wanted to remain anonymous.

She also paid tribute to the hard work and expertise of her colleague Dermot Roantree and the staff of getonline.ie – “a one-time Jesuit venture – who built the site”.

The homily was preached by Conor Harper SJ. Fr Harper said he had no doubt that quite a number of the people who had come to the Mass were anxious or worried, in bad health or had friends or family members who were unwell.

It’s in these circumstances that we pray with renewed vigour to Fr John who mediated the presence of Christ in so many lives. ”That’s what it’s all about,” he said.

“John Sullivan is not somebody who has God’s ear in some special way and gets the job done like a politician who has a special ‘in’ with the powers-that-be. No. John Sullivan points to God and puts us in touch with the One who can get the job done.”

According to Fr Harper, in an article he wrote for the Messenger magazine, John Sullivan was born on 8 May 1861 in Dublin.

His father, Edward, the future Lord Chancellor of Ireland, was a successful barrister and was already showing signs of what was to be brilliant success in future life.

John was baptised in the local Church of Ireland parish, St George’s, Temple Street, and grew up in the gentle comforts and privileges of the fashionable Dublin society of the time.

The death of his father, Sir Edward Sullivan, in April 1885 was a great shock to him. The inheritance he received after his father’s death ensured that he was very comfortable in financial terms.

Then in December 1896, at the age of 35, after some years of soul searching, he decided to become a Catholic. He was received at the Jesuit Church in Farm Street, London.

In 1900, John decided to become a Jesuit and entered the novitiate in Tullabeg, Co Offaly.

He was ordained a priest on 28 July 1907. He was then appointed to the staff in Clongowes Wood College, Co Kildare, where he was to spend the greater part of his life as a Jesuit.

His reputation for holiness spread rapidly around Clongowes and the neighbourhood. Despite his brilliant mind and academic achievements, it was his holiness that was recognised.

Many who were in need of healing flocked to him and asked his prayers – and many were cured.

He was always available to the sick, the poor, and anyone in need. The call to serve God in serving those who suffered in any way was a driving force for the rest of his life.

Since that time, he has been revered by many as a saint.

In June 2002, the findings of the Supplementary Tribunal of the Archdiocese of Dublin for the Cause of the Canonisation of the Servant of God were forwarded to the Holy See.

There is a constant demand for blessings with his vow crucifix, which is kept in St Francis Xavier’s, Gardiner Street, where Fr John’s earthly remains repose in the Sacred Heart Chapel. Many come to pray at his tomb.

There are many accounts of comfort and healing from those who have been blessed with Fr. John’s Cross. There is also a constant demand for relic cards.