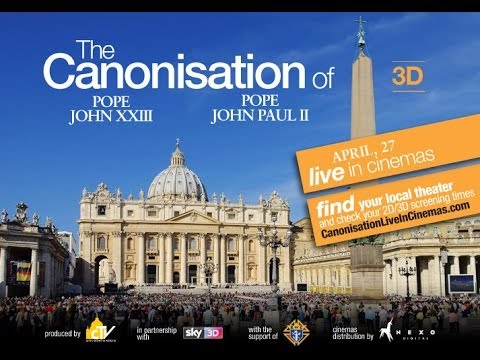 On Sunday 27 April Blessed John XXIII and Blessed John Paul II will be canonised by Pope Francis in St Peter’s Square in Rome.

Ahead of the canonisations, the Catholic Communications Office in Maynooth has created a special web feature, including background information on the two new saints.

It also provide information about special events which are happening across Ireland to commemorate this special event.

This web feature can be found here: http://www.catholicbishops.ie/2014/04/08/canonisations-blesseds-john-xviii-john-paul-ii/

Of particular interest to an Irish audience are details of special events which will take place in Ireland, including:

Events in Irish Dioceses and Parishes:

After each Mass a video presentation on the Popes will take place in Polish.

A Pilgrim Walk of thanksgiving for the Canonisations of the two Popes will take place during Easter Week from Dublin to Clonmacnois. It will arrive in Clonmacnois on Saturday evening 26 April to join in a local vigil and stay overnight for Mass on Sunday. Bishop Francis Duffy will celebrate Mass in Clonmacnois on Sunday 27 April at 3pm.

In the Diocese of Killaloe on Sunday 27 April there will be a concelebrated Mass in SS John & Paul Church Shannon to celebrate the Canonisation of St. John Paul. Pope John Paul blessed the foundation stone of the Church during his Irish visit in 1979. At 1.30pm the Polish community in the Killaloe Diocese will celebrate the Canonisation of SS. John Paul  in SS John and  Paul Church Shannon when the Polish Chaplain to the Killaloe Diocese, Fr Dariusz Plasek will celebrate Mass in Polish.

There will be a prayer service in the Pope John Paul Jubilee garden in the grounds of the Church after Mass. This Jubilee Garden was created in 2005 to celebrate the silver Jubilee of SS John & Paul Church and to honour the memory of Pope John Paul who died that year.

The garden consists of an altar with the bust of John Paul and five stations  where the five Mysteries of Light, created by Pope John Paul, are marked. To celebrate the beatification of St John Paul, the parish produced a prayer card and a book marker with photographs  of Pope John  Paul taken in Shannon on 1 October 1979 by Shannon parishioner Padraig O’Reilly.

To celebrate the Canonisation, the parish in association with Shannon Airport has produced  a car sticker with a photo of Pope John Paul, blessing the people of Ireland as he boarded the plane at Shannon Airport at the end of his Irish visit. This photo is the last recorded photo of the Pope on Irish soil. The sticker is being provided to parishioners and anybody who would like one as a blessing of protection of St John Paul when travelling.

As we know Pope John Paul travelled extensively and, with his intercession, we ask his help to keep us safe. The sticker also encourages people to fly through Shannon Airport as St John Paul did when here in Ireland. These are available free of charge from Shannon parish.

There will be a special Mass of Thanksgiving for Saints John Paul II and John XVIII on Sunday 27 April at 3pm in Knock Basilica. The principal celebrant and homilist will be His Excellency Archbishop Charles J Brown, Papal Nuncio.

A Diocesan Mass to celebrate the canonisation of Pope John Paul II and Pope John XXIII will be held in St Eugene’s Cathedral, Derry on Sunday 27 April at 3pm.

For all those who can’t make it to Rome, this Mass will be a wonderful opportunity to commemorate the life of these two great Saints. Bishop Donal McKeown will be the main celebrant.

Young people who have completed or are currently taking part in the Pope John Paul II Award, are especially welcome. Refreshments will be served after Mass. For more information contact the Diocesan Catechetical Centre on  +44 (0) 28 71264087.

On Saturday 3 May at 5pm at the Pope’s Cross (Papal monument) in Killineer, Co Louth, there will be a gathering to celebrate the canonisations.

Archbishop Eamon Martin, Coadjutor Archbishop of Armagh will be present for this gathering which will include prayers, music and excerpts from the address of Pope John Paul II when he spoke there in September 1979. Members of the Polish Community will participate in this event.

You can listen to some of the audio of Pope John Paul II’s addresses and homilies during his visit to Ireland in 1979 by clicking here.

RTÉ Broadcast of the Canonisation Ceremony

On Sunday 27 April from 08.55 – 11am on RTÉ One Television there will be live coverage of the Mass for the canonisation with commentary by Fr Dermod McCarthy and Mary Kennedy.

RTÉ will also be broadcasting a special edition of Beyond Belief at 10.30pm on RTÉ One television on Sunday 27 in which presenter Mick Peelo will remind viewers of the lives of Pope John Paul II and Pope John XXIII and explore the meaning, purpose and process of sainthood. Bishop John Fleming, Bishop of Killala will be participating in the panel on this programme. Bishop Fleming was Vice Rector and Rector of the Pontifical Irish College in Rome.

Omniverse Vision in partnership with Nexo Digital and Sky 3D has announced that the double canonisation of John Paul II and John XXIII will be broadcast to cinemas across the UK & Ireland in 3D live from Vatican City on Sunday 27 April.

At a press conference in the Vatican, CTV chief Mgr Dario Vigano said the live transmission will require “more satellites than the Sochi Olympics.”

Mgr Vigano underlined that the Vatican decided to offer the canonisation ceremony to the world in 3D in order to give people who would want to attend but cannot, for many reasons including economic ones, the chance to get a “fully immersive” experience.

The production will use 13 3D cameras positioned in spots that will give a unique and exclusive vantage point of St Peter’s Square.

A number of cinemas in Ireland are showing the canonisation ceremonies live in 3D. The cinemas taking part are:

These screenings are free of charge but there will be a small charge of €1 for the 3D glasses. Please check with your local cinema for more information and booking.

This booklet, written by Bishop Donal Murray, remembers the pope’s landmark three-day visit to Ireland in 1979. Giving a brief overview of his early life, it explores each day of the pope’s visit, with reflections on his homilies. Click here for more information on this booklet.

This booklet, also written by Bishop Donal Murray, explores Angelo Roncalli’s life both before and during his pontificate as Pope John XXIII. Though his time as pope was brief it was marked by freshness and renewal, seen above all in his decision to summon the Second Vatican Council.

For more on the Process of Becoming a Saint – please see: http://www.catholicbishops.ie/2014/04/08/canonisations-blesseds-john-xviii-john-paul-ii/