The wearing of the green: Pope Francis’ Irish vestments 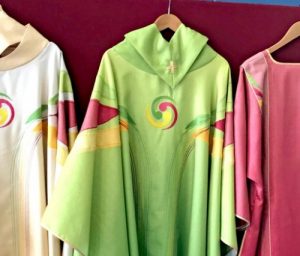 Vestments to be worn at masses during the World Meeting of Families 2018.

Pope Francis will wear green vestments inspired by Celtic imagery at Mass in the Phoenix Park. “At the centre of each vestment is the Trinity spiral, the same as can be seen in the WMOF2018 logo,” said Fr Damian McNeice, Master of Ceremonies to Archbishop Diarmuid Martin, as he presented the vestments to the media on Wednesday.

“The three parts of the spiral represent the mystery of the Holy Trinity, and also draw from Celtic imagery, as spirals can be found on many ancient stones and monuments of Ireland’s past. The colours used in the spiral are the same green, red and gold as the vestments.”

The head of the Liturgy Committee for WMOF2018 said the Pope would wear green in the Phoenix Park, as “green is a symbol of how God is ever-faithful, and it also quite appropriate for a celebration in Ireland”.

The vestments were produced by Haftina, a family business based in Poland, which specialises in liturgical vestments.

Fr McNeice noted that many of the vestments produced for the visit of Pope John Paul II in 1979 were still used today, particularly at ordination ceremonies, and said he hoped the new vestments would be a gift to the Irish Church and could be used in major celebrations for years to come.

The Master of Ceremonies explained that in the run-up to the World Meeting, they had wanted to have something “particularly Irish” on the altar. He explained that when he and Archbishop Martin were at a Mass with the Carmelite Community, he saw an old penal cross there that dates back to 1763, hewn out of one piece of wood. “I was completely taken by it,” he said. “When you hold it it feels like skin.”

The carvings on the front and back of the cross are designed to tell the story of the Passion and Resurrection of Jesus Christ. This will be on the altar as Pope Francis celebrates Mass in the Phoenix Park. The penal cross has served as the inspiration for the beautiful processional cross, which was crafted by Anne Murphy of Eala Enamels in Carlow.