“We share in the grief of the entire city of Paris” 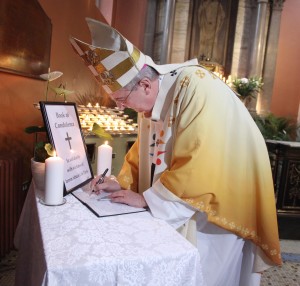 Archbishop Diarmuid Martin of Dublin signing the book of condolence in St Mary’s Pro Cathedral after a mass to remember the victims of the Paris tragedies. Pic John Mc Elroy.

Prayers are being said in churches across the country today for those killed and injured in the Paris attacks.

The Bishop of Down and Connor joined other Church leaders on Saturday in praying for the 128 people killed and the 200 injured in the IS claimed terror attacks.

In a homily at the inauguration of the parish council in St John’s Parish in Belfast, Bishop Noel Treanor pledged to hold in his prayers and thoughts “those who were killed, their families and friends, the injured, as we do also the people of France, the city of Paris and all who serve in public office in that country and city.”

He described the terror attacks as “barbaric and monstrous”.

Dr Treanor emphasised that parishes and the faith communities of all religions share a responsibility before God, humanity, the international community and its institutions, to promote and inculcate at individual and local community level attitudes and virtues which pursue the way of peace over war and violence, justice and dialogue over revenge and retaliation, the language of prayer, mercy and contemplation over words of poisonous hatred and xenophobia”.

Commissioning the pastoral council in the parish of St John the Evangelist he commented, “We are painfully aware of the precarious, insecure and troubled state of the human family and the cosmos in our times, of which last night’s barbaric and monstrous attacks in Paris were cruel expressions,” he said.

“What else should and can we do, we ask ourselves? What responsibility do we carry as one parish in a local Church in the Christian world community?”

“We can and should intensify our commitment and efforts to promoting a culture, a morality and a lifestyle of respect for all human beings, their culture, traditions, religions and their rights as persons and peoples.”

“In this fiftieth anniversary year of the publication of the Second Vatican Council’s prophetic declaration on relations with non-Christian religions Nostra aetate, we should provide for inter-religious dialogue and encounter in our communities and especially for our youth as a service to civic education and to furnishing an integral and necessary element of governance systems from the most local to the global level,” the Bishop said.

“Parishes and faith communities must rally to create and sustain that civic space where courageous and hope-building political leadership can grow, function and flourish.”

In a statement, the General Secretary of COMECE, Fr Patrick H. Daly on behalf of the European bishops said, “The attacks perpetrated on the people of Paris yesterday evening fill us all with revulsion. They are beyond contempt. My thoughts and prayers go to the victims of these senseless acts of violence and their families.”

“France cannot give in to campaigns of terror or violent attack, nor can Europe.”

“Barbarism such as we have witnessed in Paris calls for a response from the civilised world. It is to be hoped that Europe is up to providing the response required. It is vital that Europe presents a united front to the terrorist threat, that it be united too in its foreign and defence policy.”

“The forces which currently threaten Europe do not respect national borders. It is imperative that the twenty-eight member states of the EU act together more effectively. Our collective security is at issue, as is our freedom to live together in peace.”

“We are united with the people of France in prayer and solidarity.”

The Primate of All Ireland, Archbishop Eamon Martin, said on Saturday morning, “Our thoughts and prayers are with the people of Paris today and we express our solidarity with the French community living here in Ireland.”

He said once more, “We are all shocked and deeply saddened to hear about terror on the streets of Paris. The sounds and images of these attacks make for frightening viewing.”

In Dublin’s Pro Cathedral a Book of Condolence has been opened at the shrine of St Laurence O’Toole.

One of the first to sign it was Archbishop Diarmuid Martin. In his homily at 11am Mass on Saturday, the Archbishop said, “The events which took place last night in Paris are a horrific example of what fundamentalism can do and what happens when religion is distorted for ideological reasons.”

He warned that, “Faith which does not foster questioning in our hearts and which becomes an ideology opens the path to dangerous fundamentalism.”

Pope Benedict, he recalled, highlighted that “the pathology of religion is the most dangerous sickness of the human spirit”.

He also reminded the faithful that St Laurence O’Toole, whose feast day is celebrated today, was a European peace-maker in his time: an Irish bishop who died in France on a mission to the Norman King to secure peace for his native Dublin.

“We remember those who died last night and those who mourn them and we share in the grief of the entire city of Paris.”

He asked that prayers be said in that intention in all Churches over the weekend.