‘We seek to share the heavy burden of your grief’ 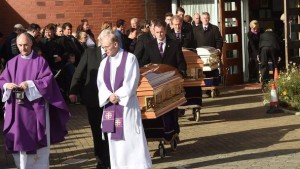 At the funeral on Thursday of the five members of the Connors family who died in the horrific Carrickmines fire, Fr Derek Farrell described Thomas and Sylvia Connors as “the best father and mother that any children could ask for”.

At the Church of the Ascension in Balally, Fr Farrell, parish priest at the Parish of the Travelling People, concelebrated the Mass with Bishop Ray Field representing Archbishop Diarmuid Martin, Mgr Dermot Lane and other priests of Ballaly parish and neighbouring parishes.

Fr Farrell said the fire which killed ten people including Thomas and Sylvia Connors’ three children Jim, Christy, and Mary, had sent shock waves through the bereaved Connors, Lynch, and Gilbert families, as well as local Travellers and neighbours, the wider Traveller community, and the whole wider Irish nation.

“In our presence and our prayer we seek to share in some small way the heavy burden of your grief. In our Mass we seek to share in the remembering of, and thanksgiving for, the precious family you have lost, and for the gift they were to each other, to you, and to many others,” the parish priest told the bereaved relatives.

As a couple, Thomas and Sylvia were seen as ‘a match made in Heaven’, “Deeply loving and devoted to each other, they never left each other’s side. They never seemed to fall out or have any serious argument. They were very close as man and woman, husband and wife.”

Of five-year-old Jim, the priest recalled that he loved to stay with his grandparents Jim and Jojo. “He was a lovely boy, a very happy boy,” he said.

Three year-old Christy was full of life, by times quiet, a big boy for his age, and up until baby Mary’s arrival five months ago, ‘the babbie’.

Thomas and Sylvia Connors’ surviving children are Michael and Tom, who is now out of hospital and back with the family “thanks to the outstanding courage and bravery of his young uncle John, who aged 15 years risked his own life to save others, a hero and a source of immense pride”.

Elsewhere in his homily, Fr Farrell said that the widespread instinctive outpouring of support for the families has been, and will continue to be, so important.

“There has been so much good done, and goodwill shown. The flowers, messages, books of condolences, prayer vigils, Masses, the shrines, the prayers, the songs.”

He said all of this has been in a context of often-new close relationships and interactions between settled and Traveller, united in various forms of solidarity and prayer over the past week.

“We need to build on this. This is a watershed moment which demands a new departure. We need together to make the deaths and the loss involved in this tragedy matter, not just to this family, but to all in our society, Traveller and settled.”

“As a lasting meaningful tribute to those devastated in this tragedy we must build on the immediate gestures of generosity and sympathy,” the priest appealed.

He recalled the words of Mgr Dermot Lane in his welcoming address who said, “This tragedy has rightly disturbed the consciences of all of us…  It has raised serious questions on issues about the provision of adequate, safe and culturally appropriate housing and accommodation for the Traveller Community, issues about the persistent reality of social inequalities between the Traveller Community and the wider settled community, and issues about deeply ingrained cultural prejudices.”

“There are important lessons to be learned. We must learn, above all, to walk in the shoes of the other if we are to develop genuinely inclusive and pluralistic societies. Many of us in the settled community have failed to walk with empathy in the shoes of our brothers and sisters in the Traveller community.”

Fr Farrell said the people of the Parish of the Travelling People and the various national and local Traveller organisations and groups, are open for dialogue and progress.

“A generous and committed response is needed from all quarters and at all levels – personal, community, Church, and State. The building of mutual relationship, respect and understanding, recognition and valuing of identity is possible and with goodwill and determination, within our grasp.”

He concluded, “Perhaps for now we can draw consolation and hope from the good we have witnessed and must build on, and from the Resurrection of Jesus that tells us that love is stronger than death, love calls us to eternal life.”