Home > News > “We have sacrificed everything for our faith”

“We have sacrificed everything for our faith” 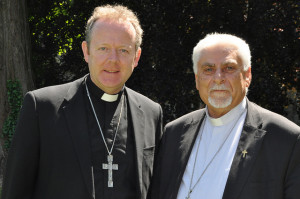 The Syrian Catholic Archbishop of the beleaguered Iraqi city of Mosul has urged the people of Ireland to welcome more refugees fleeing terrible persecution at the hands of ISIS.

On Wednesday afternoon, Archbishop Yohanna Petros Mouche spoke to the Irish bishops who were attending their annual summer general meeting in Maynooth.

Speaking to the media yesterday evening, the Primate of All Ireland, Archbishop Eamon Martin said, “One of the things which the archbishop challenged us about is the possibility of Ireland welcoming some of the refugees from among his people.”

Archbishop Martin said the testimony from Archbishop Mouche had brought home to him what Christians are enduring in Iraq.

“There is a big difference between reading something in the newspaper or even seeing it on television and actually meeting someone who is living through this situation – it was heart rending to hear him tell stories about his people, how they have been displaced, how they live their lives in fear and how difficult it is for them to get the message out about what is happening there.”

Describing the desperate plight of his people to the bishops, Archbishop Mouche told them, “We have sacrificed everything for our faith. Our people have lost everything, simply because they are Christians.”

He continued, “This is a time of terrible insecurity, with little hope of a peaceful resolution to the crisis in the near future. The Christian community in Iraq is aware that fellow Christians in Ireland and throughout the world are praying for them in their time of need. With so many people praying for us, it reminds us that God cannot forget us.”

Archbishop Mouche explained that, “The material needs of the thousands of displaced individuals and families are acute and wide-ranging. In addition to the basic necessities of food and clothing, housing is urgently needed to ensure that families can stay together.”

“Doctors and nurses, as well as medicines and other equipment, are needed to protect the health of those living in these very difficult conditions. Children and young people need access to education. This is crucial to their future, and extremely difficult without the infrastructure and resources required.”

He said the Iraqi Christian community would welcome any assistance from the Government and people of Ireland, “to support the resettlement of refugees to allow families to stay together and provide young people with access to education.”

He emphasised that while he does not wish to see his people forced to leave Iraq, the first priority in this time of crisis must be to protect the life, security and future of the Iraqi population.

Many of those who have fled as refugees to neighbouring countries are now living in conditions of extreme hardship.

Archbishop Eamon Martin said the bishops had agreed to use “whatever offices we can through, for example Trócaire, and our contacts with the Government, to encourage our Government to do more and to look at the situation”.

“We all see the pictures on our television but meeting the archbishop – who is living with displaced people in the northern part of Iraq – it challenges us to do something.”

He added, “I know that we look forward to welcoming 300 families but it is very small – a drop in the ocean.”

Archbishop Eamon Martin explained that the bishops were part of a large delegation of people who discussed this issue just a few weeks ago with political representatives.

“There certainly was a sense that our public representatives are listening and they want to hear – but that has to be translated into action,” he said.