Way of the Cross provides rare public manifestation of faith 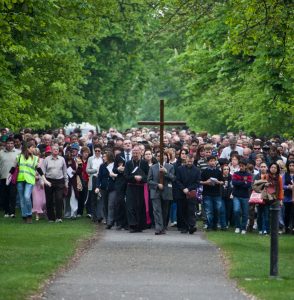 Archbishop Diarmuid Martin leading a previous Way of the Cross through the Phoenix Park.

The Archbishop of Dublin, Dr Diarmuid Martin, will today, lead the Way of the Cross through the Phoenix Park in Dublin. The public Stations of the Cross begins at 12.00noon at the Wellington Monument.  The procession will then make its way to the Papal Cross, stopping five times along the way to recall moments of Christ’s passion. At each of these the Archbishop of Dublin will give a reflection.

“You generally get around 1,000 people but I’m a bit worried about the weather tomorrow which may be a factor.”

Mr Sorenson said there were not many public gestures like this and they were important. “The Way of the Cross tends to attract people who wouldn’t necessarily be church going,” he said.

Generally, as it is hard to get parking in the Phoenix Park, the public Stations starts off with a few hundred people, and “then it grows as it goes along, also with passers by and latecomers, and by the end it is usually at its peak.  So when we finish at the Papal Cross and we are up there looking down, you can see quite a large crowd. People don’t usually leave early which is a good sign as well.”

The event starts with the recitation of the Angelus, and then at each of the five stations, there are readings and Archbishop Martin gives a short reflection of his own. “His interventions are published, but not given out until the moment of the walk,” explained Mr Sorenson. The reflections are also published on the website for the Dublin diocese. “We only do five stations, not 14, so there is a lot of walking in silence in between, to reflect on what has been said.”

The crowd gets the “odd jeering” from the road, he said, but “that wouldn’t be typical. Generally people are silent.  They see something important is going on and they are quite respectful. The Archbishop’s presence is something that gets people’s attention as they walk by. Walking behind the cross, he stands out.”

Occasionally in the past, the Papal Nuncio has joined the solemn procession, but the presence of Archbishop Jude Thaddeus Okolo from Nigeria is not envisaged today. “We’re not expecting him but you never know though,” added Mr Sorenson.

While not officially involved in the Referendum campaign, CL has produced a leaflet with comments on the campaign which they plan to distribute at the end of the Way of the Cross. The leaflet entitled: Referendum: a great divide or an impossible unity? is available for download from the CL website: http://ie.clonline.org/default.asp?id=750

This evening, Archbishop Diarmuid Martin and Church of Ireland Archbishop Michael Jackson will lead a silent procession from the Anglican Christchurch Cathedral to the Catholic St Mary’s Cathedral in Dublin, carrying the cross of the Taizé community.  The procession begins at 7.15 pm at Christchurch.