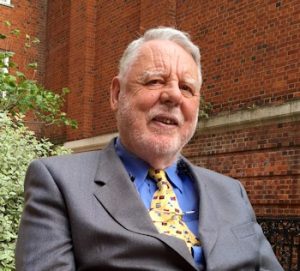 Terry Waite prayed the Lord’s Prayer when his captors subjected him to a mock execution. The envoy of the then Archbishop of Canterbury Robert Runcie was kidnapped when he went to Beirut to negotiate for the release of hostages, he told the Immrama Festival of Travel Writing in Lismore, Co. Waterford.

He had spent many years travelling for negotiations in the world’s worst war zones before being captured and held in solitary confinement for almost five years. He never gave up on his belief that peace is possible, even in recent times, which he described as a “Third World War” situation.

“Warfare will not solve the problems of the Middle East,” he told the 400-strong audience in Lismore. “It is quite possible to get people from different backgrounds, traditions and religions together and they begin to communicate, but it takes time.”

In response to the question about his faith he said: “I have my own belief. I am a life lay member of the Church of England.” He explained that when he was captured: “I couldn’t and didn’t feel God. Faith shouldn’t depend on feeling.”

He said that he fell back to the “language and rhythm” of prayer, and as an example quoted from the Book of Common Prayer: “… O Lord; and by thy great mercy defend us from all perils and dangers of this night.”

He spoke of how various denominations of Christian faiths, religions and other convictions are “hand rails” to help people to get to the same place.

His newest book, Out of the Silence, includes memories, poems and reflections, and he told the packed Immrama festival hall that he would conclude with the poem “Peace”, which is something he has tried to work for and aspire to in his life.

“Peace is the fragile meeting
Of two souls in harmony.
Peace is an embrace
That protects and heals.
Peace is a reconciling
Of opposites.” 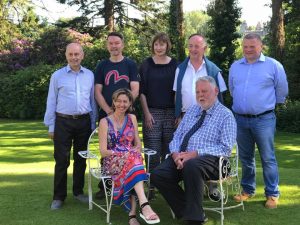 Speakers and organisers at Immrama Festival of Travel Writing, Lismore

When he was freed from captivity in 1991 he did not return to his own work as negotiator, which had seen him work in Idi Amin’s Uganda with the first African archbishop, in South Africa with Archbishop Desmond Tutu, and successfully assisting in the release of hostages in Iran, Libya and Beirut.

Instead, he wanted to work full time in a variety of charities he helped set up. For example, he was a joint founder of YCare, an agency working for the development of young people throughout the world. He is President of Emmaus (a charity working to end homelessness) and a joint founder of Hostage UK.

He has written several books, ranging from a serious account of his years in captivity, Taken on Trust (reissued in the Modern Classics edition by Hodder) to a comic novel, The Voyage of the Golden Handshake. His latest book, Out of the Silence, has been illustrated by Jenny Coles.

He is both an Anglican and a Member of the Society of Friends. He is not a pacifist, but strongly believes that force should only be used as an absolute last resort, and that this has not happened in recent years, resulting in chaos across the Middle East.