Home > Featured > Do you want me to marry you?  Pope asks flight attendants

Do you want me to marry you?  Pope asks flight attendants 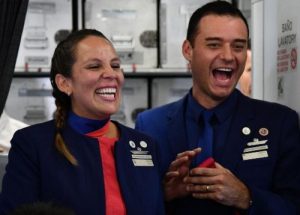 A couple of flight attendants on a short flight from Santiago to the northern city of Iquique, Chile, got the surprise of their life when Pope Francis offered to marry them and then did so.

Paula Podest, 39, and Carlos Ciuffardi, 41, met through their work with LATAM, Chile’s flagship airline. Paula had been Carlos’ boss. They got married in a civil service but their planned religious ceremony was cancelled when an earthquake almost destroyed their parish church in the Chilean capital, Santiago, in 2010.

The couple began chatting with the Pope on Thursday (17th January) when they were sitting next to him during a group photo on the flight. The Pope asked them were they married, and they told him about the earthquake which put an end to their planned religious wedding ceremony.

“Do you want me to marry you?” he asked the couple. “Here?” they replied, astonished.”Okay!”

The couple told journalists afterwards that Pope Francis then blessed their rings and then said “we need a witness.” Carlos turned around and asked his boss, the CEO of the airline, to serve as witness. Then Pope Francis asked a Chilean bishop to draft the paperwork. The cardinal drafted the wedding certificate on a sheet of paper from the airline by hand and then the couple, Pope Francis and the witness signed it. 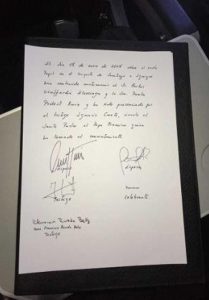 The Pope told the couple, “This is what’s missing in the world, the sacrament of marriage. I hope this motivates couples to marry.”  He asked Carlos if his wife was still the boss to which he laughingly replied ‘yes!’ The couple have two children Rafaella, six, and Isabella, three.  Afterwards they told journalists they planned  to celebrate with a “tiny honeymoon” in the northern city of Iquique on Thursday night, before flying back to Santiago yesterday.

Under Canon Law, Catholics must marry in a church or other “appropriate place”. If there’s the danger of death, in a deathbed situation, priests may perform a wedding, but according to one canon lawyer, what Pope Francis did was absolutely exceptional. “It has never happened before,” Fr Alex Stenson told CatholicIrleand.

“The Pope is the supreme law maker and he can dispense himself from the law in that sense. If he wants to do something like that there is no one who can challenge him on it.”

He continued, “It’s more a manifestation of the kind of man he is, reaching out to people who are in situations,  where he sees beyond the law and has the ability and the power to do so whereas most of us don’t.”

Asked if it might create new precedents for Catholic weddings, Fr Stenson said it was a “papal gesture. I don’t think it will change the law particularly”.