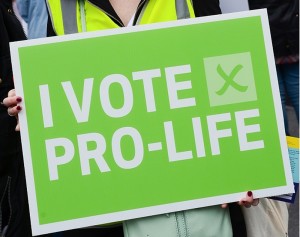 In addition to today’s vote in the Referendum polls on marriage and the age of the president, the people of Carlow and Kilkenny are voting for a new Dáil deputy.

The Pro Life Campaign (PLC) has appealed to voters in the by-election to vote for candidates and parties who “publicly oppose the Government’s abortion legislation and support the protection of human life from its fragile beginnings”.

In advance of the poll the PLC surveyed all the candidates asking the following questions:
“As a Member of Dáil Éireann and notwithstanding the position of your political party (if applicable) will you:
(i) Vote against abortion at every opportunity.
(ii) Vote against destructive embryonic stem cell research at every opportunity.
(iii) Work with like-minded TDs and Senators to advance the protection of life at all stages.
(iv) Work towards the repeal of the abortion legislation introduced in Ireland in 2013.

Some replied while others made their views known elsewhere throughout the campaign, for example to the media.

According to PLC, the following is a summary of where each candidate stands on the issue of abortion.

Pointing out that the Government legislated for abortion in 2013 when the medical evidence showed that abortion, “far from helping women in pregnancy, may actually expose them to greater risk,” the PLC appealed to voters in Carlow / Kilkenny to show that abortion is a key election question.

“It is important that politicians know that pro-life supporters are not happy about the current situation, which places women and their babies at severe risk of harm or loss of life.”

“It is also important that we ensure that the politicians elected in the future are those who will work in Dáil Éireann to protect and defend the right to life of both,” said a PLC spokesperson.