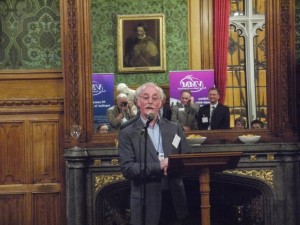 The House of Lords has highlighted the work of a voluntary Catholic group which has made a major contribution to international development.

Last week, Lord Mike Storey, CBE, of Childwall hosted a reception at the House of Lords for the Chief Executive of the Volunteer Mission Movement, Dr Vincent Kenny.

At the reception, Lord Storey stated that, “The institutional and human capacity building undertaken over centuries by religious and Christian faith organisations laid the ethical and service foundations for the modern British State today.”

Quoting the epitaph of Sir Christopher Wren, who is buried nearby at Westminster Abbey, “si monumentum requiris, circumspeci” (if you seek me in monument, look around) Dr Kenny said, “The societal work of religious and faith groups continues to be seen throughout Great Britain today through their legacy of voluntary hospitals, social services, universities and schools and also throughout the developing world.”

He continued, “These are the real capacity building blocks of integral human development which VMM continue to support through the work of their professional and vocationally minded volunteers.”

More than sixty people attended the event which brought together faith partners and highlighted the issues and successes involved in faith-based overseas development and mission.

Bishop John Arnold, Auxiliary Bishop for the Diocese of Westminster and Chairman of Cafod, spoke of building capacity.

“People are no longer waiting for handouts alone,” Bishop Arnold said. “The work of the VMM goes much further than just giving money to the needy – it is about fulfilling the potential of people.”

Helen Stawski, Deputy Secretary for Development for the Archbishop of Canterbury, said that the impact of local faith communities is often unseen and unrecorded and she gave several examples of the work and the potential of faith groups involved in development work.

She spoke of the Faith Partnership Principle established in 2012 to build a common understanding of shared values between faith groups.

In 2007, Dr Vincent Kenny was appointed Chief Executive of VMM after holding the position of General Coordinator of VMM since 1999, during which time he helped build its overseas programme.

He has more than 35 years’ involvement in international health and tropical medicine at several institutes of research and teaching, including RCSI, Liverpool of Tropical Medicine and Trinity College Dublin. He has worked in many countries of Africa, Asia and Latin America.

The Volunteer Mission Movement is a registered charity in Ireland and has its general office in Dublin as well as an office in Liverpool and in Coatbridge in Scotland.

It began working in 1969 in Uganda and since then has been involved in projects in nearly 40 countries.

Its principle is that authentic human development must foster the development of each person and of the whole person.

Since VMM grew out of the challenge for lay participation in the development work of the Church, it has tended to work mainly with missionary congregations who are often at the forefront of working with the poor and the marginalised.

Over the years this has broadened out to include working with people of all faiths and none, including civil society and local community organisations.