Home > Featured > Vocations will be a priority for Bishop-elect Duffy

Vocations will be a priority for Bishop-elect Duffy

“We have to face the fact that at the moment there are [fewer] priests than we were used to, and this has an effect on how parishes operate. Obviously, there is a whole richness within the laity that hasn’t been tapped into.” 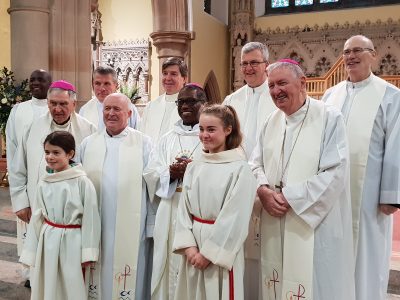 The newly announced Bishop of Clogher has said vocations will be a priority for him as the diocese comes to terms with fewer priests.

Bishop-elect Lawrence Duffy told CatholicIreland.net that he would be encouraging men to consider the permanent diaconate, which he said was “obviously God’s plan for the Church”.

“If they are willing to serve – that is a blessing,” he said.

He also gave his support to Clogher’s recently published pastoral strategy, which seeks greater lay involvement in the life of the Church as the number of priests declines.

“We have to face the fact that at the moment there are [fewer] priests than we were used to, and this has an effect on how parishes operate. Obviously, there is a whole richness within the laity that hasn’t been tapped into. Maybe it wasn’t encouraged simply because we had a lot of priests. This may be the opportunity now for the laity – both men and women – to take their rightful place.”

Speaking about the four years he spent ministering in the Diocese of Kitui in Kenya, where he oversaw the building of a new church in Mwingi, Monsignor Duffy explained, “It was a wonderful experience because I saw a different version of Church; it was a young diocese with few enough priests. At one stage I was in charge of over 30 churches on my own. It was very different to what I experienced in Ireland but it was very enriching for me and inspiring for my faith, to see how people coped in difficult circumstances.”

On the matter of vocations, he told Catholicireland.net, “God calls who he will; very often another human person is involved in a vocation to priesthood or religious life. That is the call of every Christian, to try and be that person to influence for good somebody to dedicate their lives to the Church and in the service of the people.

“Vocations will certainly be a priority and have been in the diocese for some time; we certainly need priests. To offer to be a priest today is to take on a real challenge – please God many will do that,” the 67-year-old said.

Mgr Joe McGuinness, who was administrator of Clogher while the diocese awaited the announcement of a new bishop to succeed Bishop Liam MacDaid, who retired in 2016 on health grounds, said Clogher faces “significant challenges particularly in relation to the diminishing number of priests”.

“The challenge for us is greater involvement in ministry and in our parishes of the laity. I think Mgr Larry is as familiar with that as anybody and I think he will address that with his own gifts and talents.”

He said the bishop-elect would take time to become familiar with the broader diocese and to see “where the challenges lie and how they may be met as we move forward into the future”.

“I share the joy of my brothers and sisters in Christ, the Catholic clergy and people of Clogher, that they have a Chief Shepherd to lead them in the years ahead.”

Bishop McDowell added, “It is a double blessing that a priest of Clogher Diocese has been chosen to continue to serve the people who he knows and loves. No doubt there will be special rejoicing in Magheracloone that a son of the parish has been called into this vocation.”

He said he looked forward to working with the new bishop “in the same spirit of friendship and service as I was fortunate enough to share with his predecessor Bishop Liam McDaid.”