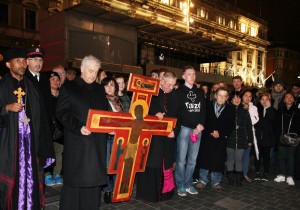 Archbishops Michael Jackson and Diarmuid Martin pausing at the GPO to remember those killed in 1916. Pic John Mc Elroy.

Our world is seeing “senseless violence” on a scale it has not seen for decades and in some cases it is being “perpetrated in the name of God”, Archbishop Diarmuid Martin of Dublin said on Good Friday.

At the annual ‘Way of the Cross’ walk in the Phoenix Park, the Archbishop warned, “Violence is never the answer.”

He told up to 600 members of Communion and Liberation, as well as parish representatives and members of the new Irish communities that, “In a world filled with compromise and superficiality, the followers of Jesus Christ are called to be witnesses to integrity and authenticity in their lives.”

In his second reflection in the stations of the cross, the Archbishop highlighted that we are living in a world “where power is abused” and he referred to the many ways in which “the most fundamental rights of men women and children are violated”.

“We remember our brothers and sisters in Jesus Christ who suffer persecution and exile because of their belief. We live in a world where the name of God is used to foster attitudes and deeds which could not be farther away from the real identity of God.”

Calling for a new definition of respectability, the Archbishop of Dublin said the respectable are not those who have power or influence or celebrity status.

“The murdering criminals think that wealth and cars and luxury villas will give them respectability. But remember that they find that model of respectability precisely in the pseudo values that we ourselves often espouse,” he criticised.

As the pilgrimage edged towards its conclusion at the papal cross, the Archbishop reflected on how humanity is deeply wounded. He noted that in so many lives there is a great uncertainty and insecurity.

In a nod to the Church scandals, the Archbishop acknowledged that Church leaders so often have not been pillars of loyalty and integrity but rather too often become trapped in upholding their own prestige and interests and the “good name” of an institution, living in and defending their own small world.

“They fail to see that in the parable of the Good Samaritan, a parable about what is needed to enter eternal life, the villains are insiders – a priest and Levite – and the hero is a Samaritan a stranger a foreigner and outsider,” he said.

He highlighted that throughout history, the great reformers of the Church were outsiders to the establishment.

“The true reformers are outsiders, outside the closed culture which is a particular danger for us clerics and our culture. But they are not outsiders who sit on the side-lines and like to take pot-shots at the wounds of the Church or become pundits ready to criticise from a safe distance from the call to change their own hearts.”

Speaking to CatholicIreland.net, a first time participant in the Way of the Cross, Gerald Tyrrell from Drimnagh, praised the Archbishop’s stance against criminality.

“It’s important that somebody speaks out. So many people are worried over the rise of violence. It is getting out of control. Anybody who has experienced violence would say we don’t want revenge – revenge only leads to more violence,” he said.

Margaret Biondi of the Catholic group, Communion and Liberation, which has organised the Phoenix Park event for the last fourteen years, also praised the Archbishop for taking a stand against the criminals and terrorists.

In his homily, the Archbishop also highlighted that the celebration of Good Friday on the Feast of the Annunciation, was “very unusual” and that its occurrence in 1608 had spurred the English poet John Donne to write the poem ‘Upon the Annunciation and the Passion Falling on the Same Day’.

Beginning with prayer, the Church of Ireland Primate, Archbishop Michael Jackson, said they were gathered at the end of “a very sad week” as he remembered those who died in Buncrana and those killed in Brussels in the prayers he offered at an ecumenical service.

Ahead of setting on the ‘Walk of Witness’ with Archbishop Diarmuid Martin, Dr Jackson prayed for those who suffer and carry grief and for “refugees and those who suffer in Syria and Iraq and other forgotten parts of the world”.

In his prayers, Archbishop Martin urged the congregation to “remember the place and message of Jesus Christ in the history of our country but above all in the future of our country”.

The ecumenical Walk of Witness from Christ Church Cathedral to St Mary’s Pro Cathedral proceeded through the centre of the capital.

The two Church leaders, holding a Taize cross, stopped and prayed for all those who died in the events of Easter Week 1916 outside the GPO before they proceeded to a service of Taize prayer at St Mary’s Pro Cathedral with St Kevin’s Young Adult group.