Home > News > Violence can never be the answer priest warns

Violence can never be the answer priest warns 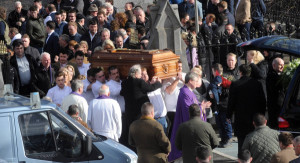 The priest presiding at the funeral for Barney McGinley, who was shot dead at a wedding in Co Fermanagh last week, appealed to those who loved him not to resort to violence.

On Monday, Fr Turlough Baxter told family and friends of the 63-year-old’s who were gathered in St Mary’s church in Athlone that, “Even though Barney has died, for all you who loved him he will live on in the good things he has done, because goodness is always in the end stronger than the evil that others may do to us.”

The father of nine was shot dead as a family wedding was getting underway. There killing has been linked to a feud with another family within the Traveller community.

In a reference to the tragedy, the priest said that on a day that was to be a joyful family occasion, others chose to end the goodness of Barney’s life and leave a family in such grief and loss.

“It takes such a short time to open wounds in others that can take a life time to heal,” Fr Baxter commented and appealed, “Violence can never be the answer, because all that it does is foster more hurt and violence and delays the day of Justice.”

He told the mourners that they were there because the story and life of Jesus calls them to live by a different way – ‘love your enemies, and do good to those who hurt you.’

“These words may seem hard to live by when we feel such pain and anger.  But they are the only way to truly find a new way of life,” the priest underlined.

Elsewhere in his homily, he said life is such a precious gift, so often it is only when someone is taken from us that we come to truly appreciate what they have meant to us.

He cited lined from a part of a quote by Pope Francis that hangs in Barney’s home which was a recent gift from Rome.

“It calls us to trust in the Lord even when the circumstances of our life might make us feel not like that.”

The priest said it captured Barney – a patient father, a good friend, always at your side, someone you could trust in.

“A gentleman is also how some of you have described Barney to me,” he said.

Barney’s widow Bridget, was assured of support “at this most difficult time” having lost her husband of 41 years. She described him as the love of her life.

“You made a home together and with him travelled to various places and set up many homes, but it was in the end, Athlone where you were most at home,” Fr Baxter recalled.

The home that Bridget and Barney made was a special place for each of their nine children.

Even to walk into your home over these last few days, gives you that sense, a place set up by people who are proud of where they live, Fr Baxter observed.

“Barney was always proud of how he would dress and how he would be turned out. The best of what he could get, is what he would want to have, for himself and family, because it spoke of his outlook on life, making the most of each day, enjoying his horses and proud of his tool shed and being able to turn his hand to many jobs and roles.”

The priest concluded by praying that as they laid Barney to rest “may he know that peace of the Lord for ever and may we help to bring that peace also to our troubled world”.