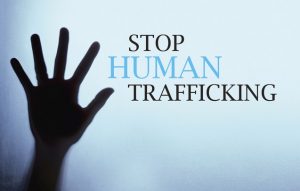 Act to Prevent Trafficking (APT)* has highlighted that there were 311 victims of trafficking detected by, or reported to, the Gardaí between 2012 and 2016,

APT and its members, including the OLA sisters, highlighted the figures for the annual EU Anti-Trafficking Day on the 18th October. They invited the public to pray for the women, men, girls and boys who have been trafficked into, out of and across Europe. A special prayer service booklet was compiled for use by all (see links below).

Ruhama also marked the day and stated, “This is a good moment to remind ourselves that trafficking disproportionately affects women and girls – more than two-thirds of trafficking victims in the EU are trafficked for the purposes of sexual exploitation – and 95% of these are women and girls.”*

The charity which assists people who have been affected by prostitution and other forms of commercial sexual exploitation also stated, “Last year we provided vital support to 92 women who were victims of sex trafficking – helping them to rebuild their lives and their sense of selves.”

The Medical Missionaries of Mary (MMM) also offered prayers for victims who are held in slavery and stated: “Some of our Sisters are helping survivors, and we are working to raise awareness of this international criminal activity.”

On Saturday (14th October 2017) in Nairobi, Sister Mary O’Malley was among a group who organised an information day at Tangaza College. Among the speakers was the Papal Nuncio, Archbishop Charles D Balvo. Quoting Pope Francis, he reminded those present that, “Human trafficking is an open wound on the body of contemporary society, a scourge upon the body of Christ. It is a crime against humanity.”

The importance of faith-based groups working together across the globe to keep vigilant, and to educate those at risk was stressed. The Nuncio spoke of  the Santa Marta Group, named after the residence of Pope Francis, an international alliance of police chiefs and bishops working together to coordinate efforts of law enforcement and faith-based organizations to combat human trafficking. 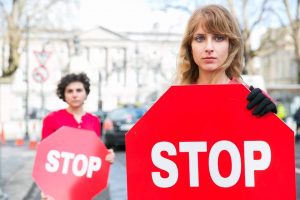 In advance of the EU awareness day, the Immigrant Council of Ireland (ICI) released a report which included testimony from victims of trafficking in Ireland. It called for a “much swifter process of formal identification of trafficking victims, including those in the asylum process, and more compassionate, gender-specific accommodation.” Brian Killoran, CEO of the ICI, said that the report examined the experiences of trafficking victims who are claiming asylum in Ireland alongside State policies.

“We are failing to meet their needs,” he said. “A key concern is the lack of recognition of the special needs victims of trafficking seeking protection have compared with other categories of asylum seekers. For example they should not languish in direct provision while waiting for formal identification, as it is only at that point they can access the supports to which they are entitled. They also need female-only accommodation where they feel safe.”

One woman who was trafficked into Ireland said that it bothered her that there were men in her accommodation.
“After what happened to me…I feel less confident about myself. Like I am worthless…I did not feel safe. Men were hitting on me,” she said.

Nusha Yonkova, Anti-trafficking Manager, ICI, said that the 311 victims detected by or reported to the Gardaí, is “just the tip of the iceberg”. ICI research echoes many of the recommendations made by the Council of Europe’s Group of Experts on Action against Trafficking in Human Beings (GRETA) in its country report on Ireland published in September. For example, GRETA has also called for urgent action to streamline the identification process so asylum seekers can be formally identified as victims of trafficking and be given more suitable accommodation, and to install an independent national rapporteur on human trafficking.

The report was published as part of a pan-European project, TRACKS – identification of TRafficked Asylum seeKers’ Special needs.

*Sources: European Commission and the United Nations Office on Drugs and Crime (UNODC).