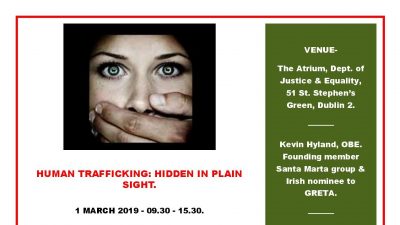 Ruhama has assisted over 3,000 women affected by prostitution from more than 60 countries, a conference on trafficking was told on Friday.

Sheila Crowley, services manager at Ruhama – Ireland’s only dedicated frontline service for women affected by prostitution and sex trafficking – addressed the Human Trafficking: Hidden in Plain Sight conference at the Department of Justice in Dublin, which was organised by the NGO Act to Prevent Trafficking (APT) and AMRI.

Ms Crowley told conference delegates that it is a fact that sex buyers buy sex from victims of trafficking.

Speaking about the profile of women involved in prostitution, she said these days they may not look like victims of sex trafficking because they are not locked away, and they may be able to attend health checks or go to Western Union to wire some money home.

But she stressed that victims of sex trafficking “are living and working beside you”.

“That is the reality of it, even though they may not look like victims.”

Five students from St Joseph’s Presentation College in Lucan, Dublin told the conference about their YSI project on the topic of human trafficking.

Noeline Blackwell, CEO of the Dublin Rape Crisis Centre, warned that many young people do not know what constitutes consensual sex.

Speaking to CatholicIreland.net she said, “We know from the young people we deal with in the age group 18 to 25 that they don’t know properly about consent. Unless they thoroughly understand these things then, inadvertently, they can do harm as well as be harmed.”

The issue of consent was the main theme of her address to the Human Trafficking: Hidden in Plain Sight conference.

She told over 120 delegates from groups involved in anti-trafficking initiatives that consent was central for sexual activity.

“A corollary is that non-consensual sexual activity is sexual violence. If there is no consent freely and voluntarily given then it is sexual abuse, up to and including rape.”

Working through a human rights framework, she said there was no way that prostitution or trafficking could be justified.

“You can’t say that the punter – the person buying the sex – is dealing with the other person involved in a way that respects their dignity and humanity and treats them as an equal and is not abusive of power, because underlying it all is exploitation.”

Ms Blackwell told CatholicIreland.net that the Government “certainly has more to do on educating young people about consent and when sexual activity is consensual or not”.

She noted that the Department of Education is currently carrying out a review on how consent and healthy relationships are presented to school children in Relationship and Sexuality Education (RSE).

She highlighted that there is a second review underway into how victims of sexual violence are treated in the justice system. She warned that if the current shortcomings in the system are not fixed, people won’t report the harm they have undergone.

“If people won’t report it, it will continue,” Ms Blackwell said.

“We have made a submission to the review of the justice system on how the investigation of this particular type of crime and the trial of offences in this area need to be specifically adapted in order to ensure that the courts and the Gardaí recognise that they are dealing with intimate violence. You can’t just treat it the same as the theft of a car.”

The DRCC is seeking to ensure that people are not revictimised and retraumatised by a trial.

The two reviews are both due in the first half of 2019.

Ms Blackwell said that if the reviews take on board the DRCC’s recommendations, “we could make progress but there is lots of progress [still] to make”.