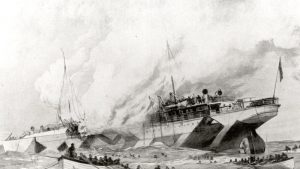 The victims of Ireland’s greatest maritime disaster were remembered yesterday during Mass at the Pro-Cathedral – the same place where, a century ago, Requiem Mass was offered for the 564 people who lost their lives in the sinking of the RMS Leinster.

On 10th October 1918, as the ship was on its way from Dun Laoghaire to Holyhead, it was struck by a German U-boat torpedo. Its 771 passengers included civilians and members of the military, plus a group of postal workers who served in the mail boat’s on-board sorting office as the ship travelled across the Irish Sea.

During the rescue and recovery operation, some 200 ambulances were used to ferry survivors and the bodies of the dead from the quay at Dun Laoghaire, but bodies washed up on the eastern coast for days after. The tragedy occurred in the last month of World War I, when hopes were rising of an end to the fighting and the loss of life.

In his homily, the Archbishop described World War I as “a history of noble idealism but also a history of horrific barbarities”.

While it may be necessary, on occasion, to use force to halt the hand of an aggressor, war inevitably leads to disaster, said Archbishop Martin.

“Any commemoration of a disaster like that which hit the RMS Leinster must lead all of us to commit ourselves to working to see that what happened should never happen again, and what caused it to happen should never occur again. Lord, spare us from the tragedy of war.”

The fact that it was a Royal Mail Ship (RMS) that was sunk is particularly poignant to Dubliners, said the Archbishop. “In times before Aer Lingus or Ryanair had become the common ways of transport, the mail boat had a special place in the sorrows and joys of the people of Dublin. For me, it marked happy days as we set out on a family holiday.  There was a special platform on Westland Row Station from which a train would set out exclusively to the mail boat pier in Dun Laoghaire.

“This affection for the mail boat that played such a part in the lives of ordinary Dublin people adds to the sense of horror that comes to us as we remember the unprovoked attack of 100 years ago.” 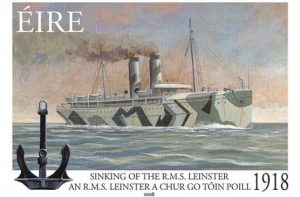 A commemorative stamp issued by An Post in 2008, the 90th anniversary of the disaster.

The Archbishop noted that the crew of the German submarine were also victims. As a result of the attack, the UB-123 strayed into a minefield, struck a mine and was destroyed.

“Lord, save us from the horrors of war. Let us remember in our prayers the many innocent men, women and children who die in our days, exploited for the power interest of others,” said the Archbishop in his homily.

“Spare our young people.  Enlighten the hearts of world leaders who look on the sophisticated and ghastly instruments of modern warfare simply in terms of how they enrich an economy.”