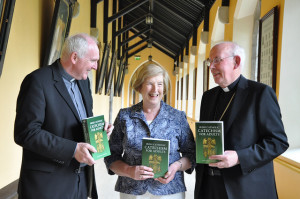 The Director of Veritas, Maura Hyland, is to meet Pope Francis today and present him with a copy of the new Irish Catholic Catechism for Adults which is Ireland’s first ever Catechism.

Speaking ahead of the presentation, Maura Hyland said, “Since he stepped out onto the balcony above St Peter’s Square on 19 March 2013 and greeted those gathered with the words ‘Buona sera’, Pope Francis has been capturing the imaginations and hearts of people throughout the world.”

“His humility, his use of images and symbols and his ability to reach out to people have spoken volumes. It is a great honour for me to meet Pope Francis and to present him with a copy of the Irish Catholic Catechism for Adults.”

Published by Veritas, the Irish Catechism for Adults is a new publication from the Irish Episcopal Conference and the result of several years’ work.

According to Veritas, the catechism is a call to renewal of faith among adults, at a time when people may be questioning whether the good news of Jesus Christ applies to them.

It responds to the recommendation in the Catechism of the Catholic Church that Episcopal Conferences develop ‘local catechisms, which take into account various situations and cultures, while carefully preserving the unity of faith and fidelity to catholic doctrine’.

Each chapter opens with a story or lesson of faith featuring a number of notable people of faith including Irish people such as Nano Nagle, Catherine McAuley and Matt Talbot, as well as others such as Pope John XXIII, St Augustine and many more.

It aims to provide Irish Catholics with an accessible, easy-to-understand introduction to Church teachings in a format they can relate to.

Ireland is only the second country in the English-speaking world to publish a local catechism based on the Catechism of the Catholic Church.

It received the official recognitio of the Holy See in late April and was launched by the Irish Bishops’ Conference on Monday, 9 June.