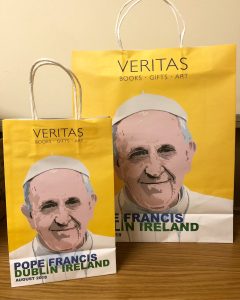 Souvenirs and merchandise linked to the papal visit of Pope Francis to Ireland have begun to appear in retailers as the country begins the countdown to the Pontiff’s arrival.

Religious bookshop Veritas, which is owned by the Irish Bishops’ Conference, has unveiled a new Pope Francis commemorative bag.

The shop has said all purchases will be put into these specially designed bags over the six weeks ahead of the opening of the World Meeting of Families on 21 August.

Veritas is also stocking mugs in the Vatican colours of yellow and white onto which a picture of a smiling Pope Francis has been emblazoned.

Separately, on Monday, the discount retailer Dealz announced it has produced Vatican-themed bunting and a Pope-themed lollipop, bearing an image of Pope Francis, to tie in with the Pontiff’s two-day visit from 25 to 26 August.

In a statement, the retailer said the papal visit was “sure to be a visit to remember” and urged the faithful to “‘Pope’ down to their local Dealz” to secure their papal-themed paraphernalia. 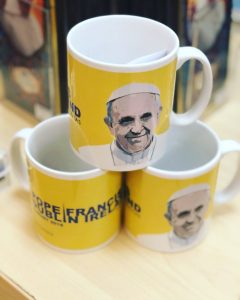 A spokeswoman for Dealz said, “The product range is a bit of fun and Dealz is confident that people will find the fun in the product.”

The Vatican bunting and flags, bearing the Vatican insignia, will cost €7 and €5 respectively, while the lollipop is retailing at €1.50.

The products will be sold in Dealz stores only, and will not be for sale at the RDS or the Phoenix Park. Dealz has 65 stores across Ireland.

The announcement of the papal themed merchandise follows news that An Post will launch two new stamps on 26 July to mark the World Meeting of Families in August and the visit of Pope Francis to Ireland.

An Post believes that the stamps will be popular with the 15,000 overseas visitors who are coming to Dublin to attend the World Meeting (WMOF2018) from 22 to 24 August in the RDS and to see Pope Francis in Knock, Croke Park or the Phoenix Park.

“They will make a nice souvenir or gift for these visitors” Anna McHugh, Head of Corporate Communications at An Post suggested.

“More than 350,000 stamps marking Ireland’s hosting of the Eucharistic Congress in 2012 were sold through post offices and online. We estimate about half were used for posting special postcards at the time while the others were purchased as treasured souvenirs of the 2012 Congress,” Ms McHugh explained.

An Post has also announced that the GPO Witness History Visitor Centre is offering a 25 per cent reduction on admission to all visitors connected to the World Meeting of Families.

“It is already heavily booked, particularly by Irish and UK groups. It’s going to be a big economic boost to the country,” the An Post spokesperson said of the World Meeting of Families event.

Tickets for all events connected with the World Meeting of Families and the Papal visit are already booked out, with half a million for the closing Mass in the Phoenix Park taken up in less than two weeks.