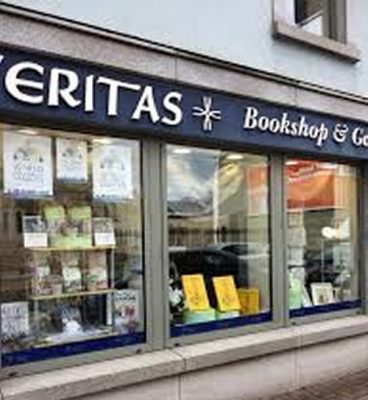 The Veritas bookshop in Monaghan.

The changing behaviour of shoppers is to blame popular religious bookseller Veritas closing three of its outlets.

Veritas bookshops in Naas, Sligo and Monaghan – which have four full-time and nine part-time employees – will close at the end of January 2019.

Making the announcement yesterday, Veritas’s director, Aidan Chester, said it was hard to make people redundant, especially in the lead up to Christmas. “While the closures are regrettable, Veritas has done its best to keep job losses to a minimum, and is working to relocate staff where possible.

“The decision to close these outlets is based on our company’s strategic planning in response to the changing shopping behaviours of our customers. Our plan includes continuing investment in our online business which has performed strongly, increasing by 52 per cent this year.”

Veritas would continue to focus on opportunities to increase its online sales, Mr Chester said. This includes click-and-collect and mobile-enabled shopping – alongside what he described as “new opportunities” in the company’s remaining stores.

Last year the company had a turnover of €7.1 million. Currently it has a staff of 97 people in its nine branches.

Veritas’ origins lie with the Catholic Truth Society of Ireland, founded in 1899 to publish and distribute a range of religious material to the Irish people. In 1928, Veritas branched out into retail and opened a store on Lower Abbey Street, Dublin, where it sold religious artefacts and pamphlets published by the Catholic Truth Society. It expanded by distributing pamphlets published in England and the United States.

In the 1930s and 1940s, Veritas supplied church vestments, as well as organising trips to Lourdes, Fatima and Knock.

Veritas Publications came into existence in 1969. Its first title was Patrick in His Own Words by Bishop Joseph Duffy.

Its Christmas catalogue contains a variety of religious artifacts, especially cribs, children’s books, and recent publications such as Pope Francis in Ireland, which is turning out to be a bestseller, having already sold 5,000 copies.

Other favourites include The Rosary Priest by Fr Tom Mulligan, Climate Generation by Dr Lorna Gold and A Cry is Heard by Jean Vanier. The biggest seller this year was the Pope’s exhortation Gaudete et Exultate, which has sold almost 7000 copies.