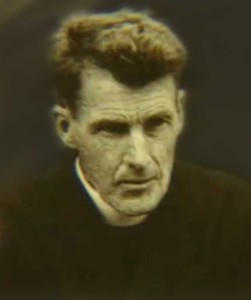 Last Friday, Pope Francis moved Irish Jesuit, Fr John Sullivan, a step closer to beatification when he approved the decree that he lived a life of heroic virtue.

His father, Sir Edward Sullivan, a Lord Chancellor of Ireland, was a successful barrister and Protestant.

His mother, Elizabeth Bailey, came from a prominent land-owning family in Passage West, Co Cork and was Catholic.

Fr Sullivan (1861-1933) was raised in a prosperous Protestant background in Dublin and was educated at Portora Royal School, Enniskillen.

He studied Classics at Trinity College, Dublin, where he was awarded the Gold Medal in Classics in 1885. This medal is preserved in Clongowes Wood College, Co. Kildare.

The death of his father, Sir Edward Sullivan, in April 1885 was a great shock to him. The inheritance he received after his father’s death ensured that he was very comfortable in financial terms.

A handsome man, he was an outdoors enthusiast and according to Jesuit Fr Tom Finlay, he was “the best dressed man around Dublin”.

But then in December 1896, at the age of 35, after a number of years of reflection, he decided to become a Catholic. He was received at the Jesuit Church in Farm Street, London.

He was later ordained a Jesuit and taught at Clongowes Wood College, where he spent most of the rest of his life.

His reputation for holiness spread rapidly. Within his own lifetime, many revered him as a saint for his constant prayer.

Those in need of healing flocked to see and hear him and asked his prayers – and God seemed to work through him, and many were cured.

He was always available to the sick, the poor, and anyone in need.

The call to serve God in serving those who suffered in any way was a driving force for the rest of his life. He was always caring for others, a source of comfort and peace to anyone in trouble.

He brought many people to faith in God.

Fr John Sullivan died in 1933 after a lifetime of prayer, asceticism and ministering to the sick and the poor whom he used to visit.

In 1960, Pope John XXIII declared him a Servant of God and his remains were transferred from Clongowes to St Francis Xavier’s Church in Dublin’s Gardiner Street.

A new website dedicated to Fr John Sullivan was launched in May this year: www.frjohnsullivan.ie