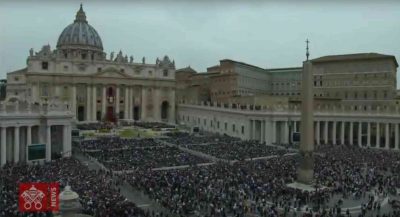 Priests who join the Vatican’s diplomatic service will in future spend a year of their formation on mission, according to new reforms introduced by Pope Francis.

The change in the formation of the Holy See’s diplomats was revealed in a letter to the president of the Pontifical Ecclesiastical Academy, Archbishop Joseph Marino.

The Vatican has diplomatic relations with 183 states.

It has diplomatic missions with nuncios in 120 countries as well as papal representatives to intergovernmental organisations such as the United Nations in New York.

Pope Francis flagged up this reform in his final speech at the Synod on the Amazon when he told the Synod Fathers that he was considering reforming the curriculum of formation for Holy See diplomats and that he wanted trainee diplomats to spend that time “at the service of a bishop in mission territory.”

In his letter to Archbishop Marino, the Pope wrote, “I am convinced that such an experience will be useful for all the young men preparing for or beginning priestly service, but especially for those who will someday be called to work with the Pontifical Representatives and, afterwards, will in turn become Envoys of the Holy See to nations and particular Churches.”

The Pope also quoted from a speech he gave to the Pontifical Ecclesiastical Academy in June 2015 where he said, “The mission to which you will be called one day to carry out will take you to all parts of the world. Europe is in need of an awakening; Africa is thirsty for reconciliation; Latin America is hungry for nourishment and interiority; North America is intent on rediscovering the roots of an identity that is not defined by exclusion; Asia and Oceania are challenged by the capacity to ferment in diaspora and to dialogue with the vastness of ancestral cultures.”

The President of the Pontifical Ecclesiastical Academy, Archbishop Joseph Marino, spoke to Vatican Radio about the Pope’s new directive on Vatican diplomats.

In the letter, the Pontiff said the change will take effect among students who enter the Academy from September 2020.

Asked how the destination for the missionary experience will be chosen, Archbishop Marino said these details were still being worked out.

“I am confident that I can count on nuncios around the world to contribute to the formulation, implementation and support of this new aspect of Academy training. One thing is certain: by having this missionary experience in the different countries, we will be able to witness first-hand the joyful and dedicated work of the missionary, bringing the Gospel in all its facets. And I think that this will give us even more enthusiasm in our work as diplomats for the Holy See.”