From the first days of his pontificate, Pope Francis has been focused on marriage, the Prefect of the Dicastery for Laity, Family and Life told 500 people gathered in Belfast for the fourth annual Faith and Life Convention last weekend.

In his keynote address, Cardinal Kevin Farrell emphasised that there are no doctrinal changes in the Pope’s apostolic exhortation, Amoris Laetitia, but it did signal a change in pastoral approach to marriage and the family.

The convention took place at Our Lady and St Patrick’s College, Knock, and focused on the theme of ‘faith in the family’, marking the beginning of a series of diocesan events in Down and Connor in the lead up to the World Meeting of Families next August.

In his address, Cardinal Farrell cited three Gospel parables which he said Pope Francis uses to the explain the person of Jesus and which are core to understanding Amoris Laetitia. These are the Emmaus encounter with Jesus; Jesus’ encounter with the adulterous woman; and the parable of the prodigal son. 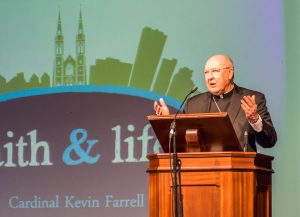 Speaking to journalists after the day-long convention, the Dublin-born cardinal said that despite all the media focus on the critics of Amoris Laetitia, “The information I have as head of the Dicastery which oversees all of this is that it has been received very well all across the world.”

He said he believed that the majority of people on the ground appreciate what was done through the consultation ahead of the synods on the family and what was written in the apostolic exhortation. “What we fail to think about many times is the extensive consultation that went into this,” Cardinal Farrell commented.

This included a consistory of cardinals that lasted two days and two synods, one year after the other, at which Pope Francis allowed free discussion which was very different to previous synods where there was a prepared text and little discussion

“This was a free-flowing discussion and he [Pope Francis] listened to every word.” He also highlighted that that majority of those who attended the synod had approved its conclusions and that most of the people who are objecting to Amoris Laetitia were not at the synod. 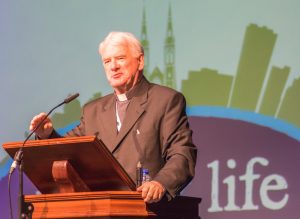 Speaking to CatholicIreland.net, Dr Treanor said he believed “it might be a very creative and imaginative idea for people to read it in small groups.”

But he also expressed the hope that in addition to parish groups reading Amoris Laetitia, it would “be possible to create ecumenical reading groups for the document because the World Meeting of Families will also include Christians from the different Christian traditions that we have in this country.”

Recalling the points Cardinal Farrell had highlighted about the level of consultation for the two synods on the family, the Bishop of Down and Connor said this for him was an expression of the participative culture and participative society of today. 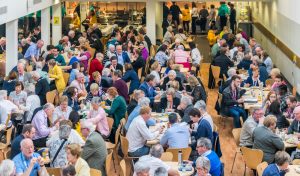 Through this people could “see how the church is in fact a living entity, a living organism and is attempting and striving to involve the people of God,” he said.

Bishop Treanor suggested that it was only now that the documents of the Second Vatican Council were beginning to be lived out.

“They were aspirational in the 1960s and are now more and more being implemented. This convention is an example of that, an effort to bring people together to experience their faith together and to explore it courageously and promote the core idea of Christianity – the dignity of each human person and the dignity of human society which means the dignity of the economy serving everyone.”

The recently professed Adoration Sisters, Sr Martina Purdy and Sr Elaine Kelly, opened the day in prayer with the specially commissioned World Meeting of Families Icon which is in Belfast this week. 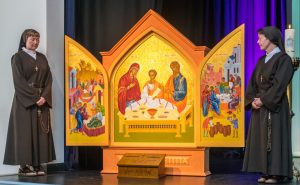 A key component of the day was a conversation on the theme of ‘faith in the family’ through a panel discussion chaired by Professor Peter Finn of St Mary’s University College.

Each panel member shared in an honest, personal and humorous manner the reality of their own family experiences, and addressed questions on how our parishes can develop as places of support for those experiencing difficulties within marriage and communities of welcome and belonging for everyone.

Among the workshops delegates attended was one on online safety for young people which was presented by the PSNI and the statutory services; another was given by a young man who has spent time working in the refugee camp in Calais.