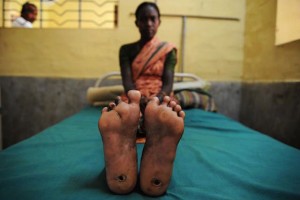 World Leprosy Day provides people with an opportunity to further the fight against “this terrible infection” as well as to weaken the ostracism that often burdens the people who carry its unmistakable signs, the President of the Pontifical Council for Health Care Workers has said.

In his message for the 63rd World Leprosy Day, Archbishop Zygmunt Zimowski said this marginalisation – “almost ‘ancestral’ fear” – can be traced back to a natural sense of self-defence in relation to a disease which at one time was incurable.

However, today he underlined, this marginalisation no longer has any reason to exist given that leprosy can be defeated and those who have been cured of it can go back to living their lives.

“The distancing, like the exclusion from social life, of those who carry its signs are, therefore, totally unreasonable and indeed they provoke further and unjustified sufferings in totally innocent people who already suffer as a result of the lesions – which are often also accompanied by disability – that are provoked by this disease.”

He emphasised that those who have good health are called to help those who still today are the victims of an unjustified social stigma to live in a dignified way.

“This constitutes a concrete sign of solidarity, of authentic fraternity, and of mercy, in line with what – during this Jubilee Year – we are taught by Pope Francis, who points out to us that we must manage to help them, ‘looking them in the eye’, without being ‘afraid to touch them’, so that ‘this gesture of help may also be a gesture of communication…a gesture of tenderness’,” Archbishop Zimowski said.

In his message, the Archbishop sent greetings to those with leprosy and thanked those who do all they can for all those people who have to be treated and cared for, or who are relegated to the margins of society because of this disease, which is still endemic in various countries of Asia, South America and Africa.

“We must feel ourselves committed to finding a new impetus against this disease, broadening activities involving information and prevention, but above all fostering, as a gesture of true ‘com-passion’, the social and occupational reintegration of those who have been cured of it and who – despite the fact that they carry the marks of this disease on their bodies – have maintained intact their dignity as persons,” he said.

As an indication of the Church’s commitment to caring for people with leprosy and supporting those who have been cured of it, and in order to increase the sensitivity, the Archbishop said the Pontifical Council for Health Care Workers, in conjunction with the Sasakawa Foundation and the Raoul Follereau Foundation, would be holding two study days on Friday 10 and Saturday 11 June 2016 in the Vatican.

Those attending the study says would join Pope Francis’s celebration of the Eucharist in St Peter’s Square on Sunday 12 June, on the occasion of the Jubilee for the Sick and Disabled.

Archbishop Zimowski also recalled the many Saints and Blesseds, as well as by men and women of good will, who have dedicated, and at times sacrificed, their lives to be at the side of people with Hansen’s disease, even at a time when leprosy was clinically incurable and a source of innumerable deaths, notably St Damien de Veuster, St Marianne Cope, Blessed Jan Beyzym, and Albert Schweitzer.

The theme of this year’s message for the 63rd World Leprosy Day is ‘To live is to help to live‘.

World Leprosy Day is traditionally help around the world on the last Sunday of January. It was begun in 1954 by French philanthropist and writer, Raoul Follereau, as a way to raise awareness of this deadly ancient disease.