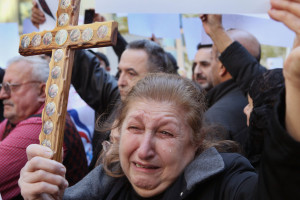 The Vatican’s chief representative at the UN, Archbishop Silvano Tomasi, has called on international leaders to take the necessary steps to stop the persecution of Christians and Yezidis in Iraq.

The Archbishop repeated Pope Francis’ recent call for action to be taken “though the mechanisms of the United Nations.”

Speaking to Vatican Radio, Archbishop Tomasi said the Holy See had two objectives for its diplomatic efforts on Iraq.

These were to seek international help to stop the violence against Christians and Yezidis, and to provide international security for refugees returning to their native villages.

Separately, the Chaldean Catholic Bishop Antoine Audo of Aleppo in Syria has called for the establishment of an international force to combat the advance of the Islamic State.

“While the Christians of Aleppo are safe now, Bishop Audo said, they have heard chilling reports from neighbouring Iraq, and fear the growing power of the Islamic State.”

He added, “No one knows when the bombs will drop.”

Speaking to Vatican Radio, Bishop Audo said “We are a bit confused; no one knows exactly what is happening. As Christians, as Syrians, we hope to have a solution of reconciliation, of peace, with the help of the United Nations.”

He continued, “An international peace force is needed. The situation in Aleppo is rather difficult, with problems of electricity, water; there is no security. No one knows when the bombs will drop.”

He explained that the Christian community try to be lively, active, to go about its business.

Asked if people are concerned about the possible arrival of Islamic State militants, Bishop Audo said, “In the city, in the centre of Aleppo where most Christians live along with others, there is no direct violent presence. We are under the protection of the government. Around the city there are many groups which attack and launch bombs. This is the situation.”

The Chaldean Catholic bishop said people have heard the horrific accounts of what happens to areas under the control of IS’s so-called caliphate.

“We’ve heard the news coming from Mosul and Raqqa. We hear the news that speak of (strict forms of Sharia) laws, of the way one has to behave, of the violence. Yes, yes, and this generally makes the people afraid… We hope though, that (these things aren’t) true.”

“The question is, who supports these groups? This is the question that we put to the international community’s conscience. Who is selling the arms? Who stands to gain from this violence?”