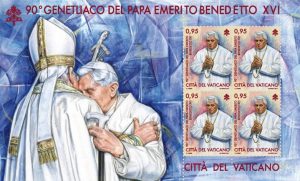 The Vatican stamp office is issuing a new stamp in early May to mark pope emeritus Benedict XVI’s 90th birthday, which the retired pontiff celebrated on Easter Sunday.

Joseph Ratzinger was born in Marktl am Inn, Bavaria, Germany, at 8:30 on the morning of 16 April 1927. It was Holy Saturday and he was baptised that day.

His elder brother, Georg (born 1924) also became a priest. Their sister, Maria, managed Joseph’s household until her death in 1991, fulfilling a promise she made to their parents to take care of her brothers.

As Cardinal Ratzinger, the future pope wrote of the importance of being born on Holy Saturday in his 1998 memoir, Milestones:

“I have always been filled with thanksgiving for having had my life immersed in this way in the Easter mystery, since this could only be a sign of blessing. To be sure, it was not Easter Sunday but Holy Saturday, but, the more I reflect on it, the more this seems to be fitting for the nature of our human life: We are still awaiting Easter; we are still not standing in the full light, but walking toward it in full trust.”

The stamp, which is designed by the artist Daniela Longo, depicts Pope Benedict praying his rosary.

Meanwhile, the Joseph Ratzinger Foundation has launched Cooperatores Veritatis, a compilation of essays to honour the former pope.

The essays are written by those who have won the prestigious Ratzinger Prize for theology.

The book’s editor intends the book to serve as a testament to the former pope’s theological and intellectual contributions.

One of the contributors to Cooperatores Veritatis: Tributes to Pope Emeritus Benedict XVI on his 90th Birthday is the Rev Canon Professor Richard Burridge, who was awarded the Ratzinger Prize in 2013.

The Dean of King’s College London and Minister in the Anglican Communion was awarded the prize for his contribution to the historical and theological recognition of the Gospels’ inseparable connection to Jesus of Nazareth.

He told Vatican Radio’s Lydia O’Kane that he first met Pope Benedict just after he became Pope in 2005.

Canon Burridge was the first non-Catholic to be awarded the Ratzinger Prize.

Commending Benedict’s contribution to ecumenical dialogue, he said, “It’s been very important … particularly because of his personal friendships with other theologians.”