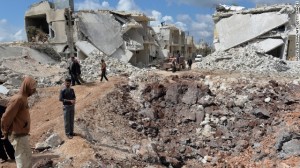 Former British Prime Minister Tony Blair and former Egyptian Vice President Mohamed El Baradei are among the key political experts invited by the Vatican for a one-day meeting aimed at promoting a cease-fire in Syria.

The meeting also aims to bring about protection of Christians in the Middle Eastern country and a transitional and unified government.

The Vatican meeting which will be held on 13 January will come ahead of major peace talks on 22 January in Geneva between the Syrian government and opposition forces.

Sponsored by the Pontifical Academy of Sciences, the day-long Vatican ‘workshop’ will seek to propose “a cease-fire to make humanitarian aid possible” in Syria.

It will also seek an end to “persecutions against Christians to encourage interreligious dialogue; a transitional authority to organise elections (and) a unified national government also responsible for the military sector and security.”

The workshop also aims to end human trafficking and prostitution in the war-torn nation.

The eight-page programme, prepared by the sciences academy, gave a brief background of the Syrian conflict.

It said US calls for Syrian President Bashar Assad to step down “put the US in effective opposition to the United Nations’ peace initiative” put forth in early 2012.

On Saturday, a delegation from the Syrian government met the Vatican Secretary of State, Archbishop Pietro Parolin, and Archbishop Dominique Mamberti, Secretary for Relations with States.

According to a statement issued by the director of the Vatican Press Office, Fr Federico Lombardi, “the delegation brought a message from President Assad for the Holy Father and explained the position of the Syrian government”.

The Syrian delegation consisted of Joseph Sweid, Minister of State, and Hussam Eddin Aala, who is both Assistant Minister and Director for Europe from the Syrian Ministry of Foreign Affairs and the current Syrian ambassador to the Holy See.