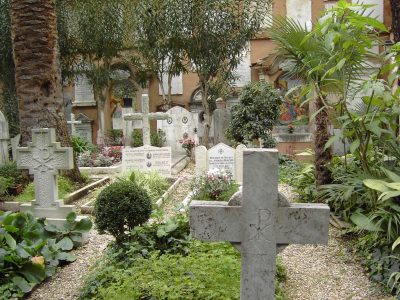 The Teutonic Cemetery located within the walls of the Vatican City.

A Vatican search to locate the body of a missing 15-year-old has produced a new mystery: where are the remains of two princesses, who were buried in the Teutonic Cemetery in the 19th century?

In a bid to locate the remains of Emanuela Orlandi, who disappeared in June 1983, Vatican investigators opened up two tombs in the Teutonic Cemetery, next to St Peter’s Basilica, last Thursday.

Emanuela was the daughter of a Vatican Bank official and belonged to one of the few families living within the walls of the city state. She had left the Vatican to attend music lessons in Rome but failed to return home. She has not been seen since.

The opening of the burial places took place in the presence of Emanuela’s brother, the Orlandi family’s lawyer and representatives of the Vatican’s justice and police authorities. The families of the two princesses were informed that their relatives’ remains were missing.

“The result of the search was negative,” said Vatican press officer Alessandro Gisotti. “No human remains or funeral urns were found.”

On Saturday, Mr Gisotti released a short statement saying that investigations about the disappearance of the two princesses’ remains are to continue. He said it is possible that the remains were moved during the 1960s and 1970s when the Pontifical Teutonic College, which is next to the cemetery, was being renovated and extended.

Already, investigators have identified two ossuaries within the college, located beneath a sealed trap door on the college’s ground floor. The Office of the Promoter of Justice of the Court of Vatican City State has instructed specialised personnel of the Vatican Police Corps to begin operations to open the trap door next Saturday, July 20.