Vatican fountains switched off as effects of drought hit Rome 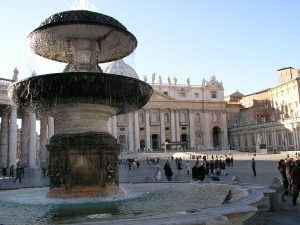 One of the two Bernini fountains in St Peter’s Square before it was switched off last week.

There are some 100 fountains dotted around the Vatican – some provide drinking water, while others, such as the 500-year-old marble Bernini fountains in St Peter’s Square, are purely decorative. All of these have been switched off by the Governate of the Vatican City State.

Vatican Radio reported that the move is in line with the Pope’s recent encyclical on the environment, Laudato Si’, but others noted that the Bishop of Rome was acting in solidarity with the people of his diocese, as across the Eternal City some 2,500 fountains have been turned off by ACEA, the water supply company. However, because many of the city’s population, as well as tourists and pilgrims, rely on Rome’s public fountains to keep hydrated, the supply is being maintained at 85 water sources.

ACEA is already in emergency talks with the Italian Environment Ministry over a proposal to start rationing the water supply to up to half of Rome’s population of three million people. The reason for this drastic move is that it has become unsustainable to draw any further water from Lake Bracciano, which lies 32 km northwest of Rome and normally supplies a substantial part of the city’s water supply.

The crisis is partly as a result of this year’s unusually hot summer – temperatures in Rome are expected to hit 38 ˚C this week – but a crucial factor is that the Lazio region, in which Rome lies, has experienced two exceptionally dry winters in a row.

It is not just Lazio and Rome that are suffering from exceptionally dry weather; across Italy two-thirds of the country’s farmlands have been affected by the drought and Italy’s rural communities have also suffered a series of major forest fires.