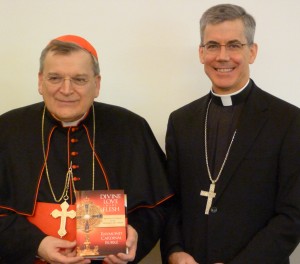 Vatican prelate, Cardinal Raymond Leo Burke, has criticised the contemporary world’s attempts to violently “silence the voice of Christ in the public square.”

In his homily at the Sacred Heart Church in Limerick on Wednesday for the Institute of Christ the King Sovereign Priest, he compared the struggle Christians encounter living their faith today to the difficulties of Christians under the pagan regime of ancient Rome.

He recalled that in both the case of St Felicitas’ seven sons, and Saints Rufina and Secunda, the pagan Roman rulers “hatefully” sought to eradicate Christianity from the Roman Empire.

St Felicitas, after her sons had been martyred, was also martyred because of hatred of the Christian faith, he explained.

Referring to contemporary battles, he urged the faithful, “In the present situation of rebellion against God and His law written upon our human hearts, let us pray for the grace to remain ever faithful to Christ and to His holy Church.”

The high profile cardinal, who is visiting Ireland this week, “urgently” appealed to “all political leaders not to pass laws which, by disregarding the dignity of the person, undermine the very fabric of society.”

The Prefect of the Vatican’s Supreme Tribunal of the Apostolic Signatura called on Catholics and “anyone of good will” in Ireland to promote laws which safeguard the dignity of human life.

Addressing the “present struggle in Ireland and in many parts of the world” to try and advance respect for the “inviolable dignity of innocent human life”, he said “proper attention must be given to the laws which govern the life of society.”

“While the transformation of hearts is the most fundamental means of the new evangelisation regarding human life, Catholics and all persons of good will must be attentive to promote laws which safeguard the dignity of human life. At the same time, one cannot ignore the irreplaceable role which law plays in culture,” he said.

The Cardinal described involvement in political life as “essential to the advancement of the cause of life.”

Families, like the family of Felicitas and her seven sons, give an essential witness in political life to obedience to God’s law for the good of all he said.

He also suggested that “a general mobilisation of consciences” and a “united ethical effort” were “urgently” needed to activate a “great campaign” in support of life.

Citing the words of the late Pope John Paul II, the American-born prelate said, “A law which violates an innocent person’s natural right to life is unjust and, as such, is not valid as a law.”

He added that although laws are not the only means of protecting human life, nevertheless, they play a very important and sometimes decisive role in influencing patterns of thought and behaviour.

In what may be a reference to Irish Catholic politicians supporting the Protection of Life During Pregnancy Bill, Cardinal Burke said the Church must address the situation where many of its members, even though they may be active in the Church, “end up by separating their Christian faith from its ethical requirements regarding life and fall into moral subjectivism and certain objectionable ways of acting.”

The Cardinal is known to favour the denial of Communion to those Catholics who support abortion.

Describing the “present situation” as one “of rebellion against God and His law”, he lent his support to recent large-scale pro-life rallies.

He also lashed out at the media saying “The thoroughly galvanised anti-life and anti-family agenda of the pervasive mass media confuse and corrupt minds and hearts, and dull consciences to the law written by God upon every human heart.”

At the end of his homily he offered payers to Our Lady of Knock, Queen of Ireland, and St Patrick, Apostle of Ireland, for the people of Ireland and Church here.