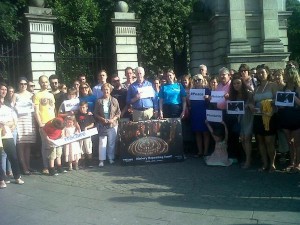 The Vatican’s permanent representative to the UN in Geneva has called for an immediate ceasefire in the Gaza as he deplored the killing of innocent civilians in a conflict which has shocked the world.

In his address, Archbishop Silvano Tomasi warned, “The perpetration of injustices and the violation of human rights, especially the right to life and to live in peace and security, sow fresh seeds of hatred and resentment.”

He noted that according to UN estimates approximately 70% of Palestinians killed have been innocent civilians.

“This is just as intolerable as the rockets missiles directed indiscriminately toward civilian targets in Israel … Demonising others, however, does not eliminate their rights,” he said.

Archbishop Tomasi quoted from the Pope saying, “The time has come for everyone to find the courage to be generous and creative in the service of the common good, the courage to forge a peace which rests on the acknowledgment by all of the right of two states to exist and to live in peace and security within internationally recognised borders.”

Meanwhile, Éamonn Meehan, Trócaire’s Executive Director, has said it is not enough to express horror at so many innocent lives having been lost in the latest round of violence in Gaza. He said we must instead ask how we can break the cycle that leads to this slaughter.

The Trócaire spokesman said, “We utterly condemn the risks to civilians by both the rocket fire and the military invasions.”

But he warned that until the underlying causes behind the conflict are tackled, the cycle of violence will continue.

“Through the European Union, Ireland can play a positive role in tackling these under-lying causes. Regrettably, however, Ireland’s position on Israel and Palestine is contradictory and self-defeating,” he claimed.

He continued, “Officially, the Irish Government condemns the military occupation of the West Bank, the continued expansion of illegal settlements and the blockade on Gaza.”

Earlier this month, he said the Irish Government issued advice to Irish businesses and citizens, warning against conducting business with illegal Israeli settlements.

“The Government noted, ‘Israeli settlements are illegal under international law, constitute an obstacle to peace and threaten to make a two-state solution to the Israeli-Palestinian conflict impossible…[the settlements] are built on occupied land and are not recognised as a legitimate part of Israel’s territory.’”

Yet, despite recognising continued illegal settlement expansion as a key driver of the conflict, the Irish Government and the EU continues to make these settlements financially viable through trade, Éamonn Meehan said.

Trade between the EU and the settlements is conservatively estimated to be at least €96 million a year. The actual figure may be as high as €160m, which stands in contrast to the total amount of Palestinian exports to the EU, which amounts to approximately €12m annually.

According to Éamonn Meehan this trade incentivises Israel to continue to expand the settlements by confiscating land and demolishing homes of Palestinians.

“It is utterly self-defeating to condemn illegal settlements while at the same time ensuring their financial viability and incentivising Israel to continue to confiscate land from Palestinian families,” he said.

“We must remove contradictions from Irish Government policy. We must stop condemning with one hand and supporting with the other. We must stop making the occupation financially viable while at the same time funding the humanitarian crisis it creates.”

He warned that until this happens “we are incentivising the continuation of this conflict.” He added, “The only way this peace will happen is through a long-term political solution.”

In his address at the UN, Archbishop Tomasi said “the legitimate aspiration to security, on one side, and to decent living conditions, on the other, with access to the normal means of existence like medicines, water and jobs, for example, reflects a fundamental human right, without which peace is very difficult to preserve.”

“The Delegation of the Holy See reiterates its view that violence never pays,” he said.

“To combat violence and its detrimental consequences we must avoid becoming accustomed to killing. At a time where brutality is common and human rights violations are ubiquitous, we must not become indifferent.”