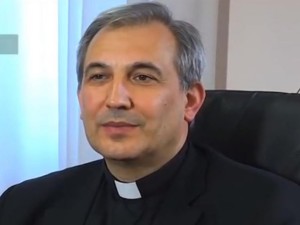 A Spanish monsignor working in the Vatican’s curia and an Italian lay woman were arrested by Vatican authorities at the weekend in connection with the “unauthorised sharing of confidential documents” the Vatican confirmed on Monday.

Mgr Lucio Angel Vallejo Balda and Dr Francesca Chaouqui previously worked as secretary and member of the Commission for Reference on the Organisation of the Economic-Administrative Structure of the Holy See.

COSEA was established by Pope Francis in July 2013 and subsequently was dissolved after the completion of its mandate.

Dr Chaouqui, a publicist who has served as a Vatican consultant, has since been released from custody after she agreed to cooperate with the investigation. Mgr Vallejo remains in custody at the Vatican.

According to a Vatican statement, the position of Mgr Vallejo Balda remains under consideration of the Office of the Promoter of Justice.

The Vatican highlighted that divulging confidential documents is a crime under the criminal code of the Vatican City State.

The arrests were made as two new books are about to be published this week. One is by Gianluigi Nuzzi who was central to publishing some of the most serious Vatileaks revelations.

The second book, ‘Avarice’ by Emiliano Fittipaldi is also believed to contain damaging new information about the Vatican’s economic affairs.

The arrest of Mgr Vallejo and Dr Chaouqui suggests that Vatican investigators believe they were sources for the authors of the two books.

In a statement on Monday, the Vatican press office said, “As for the books announced for the next few days it should be said clearly once again on this occasion as in the past, that they are the result of a serious betrayal of the trust placed in certain individuals by the Pope, and, as far as the authors are concerned, of an operation to draw advantage from a gravely unlawful act…”

“Publications of this kind do not contribute in any way to the establishment of clarity and truth, but rather to the creation of confusion and partial and tendentious interpretations. We must absolutely avoid the mistake of thinking that this is a way to help the mission of the Pope.”