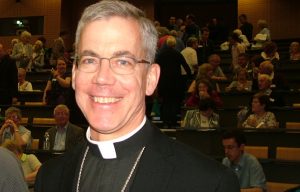 The Vatican has announced that the Papal Nuncio, Archbishop Charles Brown, will shortly move to new pastures in Albania, bringing his five-year tenure in Ireland to a close.

The New York native was the surprise choice of Benedict XVI in 2011 as the Irish Church was going through a period of turmoil in the wake of the clerical abuse reports and the Vatican visitation.

Arriving in January 2012, Dr Brown set about establishing a different style to that of his predecessors, through a more visible presence and an outgoing, easy manner.

His willing attendance at functions, from school jubilees to diocesan faith festivals, did not go unnoticed in a Church grappling with the fallout of abuse scandals, massive social change and a prolonged and difficult recession.

A tense environment greeted him in early 2012. The Taoiseach Enda Kenny had made an excoriating attack in the Dáil on the Holy See over the Cloyne Report in July 2011.

Archbishop Brown set about rebuilding bridges between Church and State and he must take some satisfaction from the re-opening of the Irish embassy to the Vatican. The Government shut it down in 2012 in what it said was a cost saving drive, but it was widely interpreted as a snub to the Church in Ireland and the Holy See.

In five years, he has played a critical role in the appointment of eleven new bishops, most significantly in the selection of Archbishop Eamon Martin as Primate of All Ireland.

In a statement on Thursday, Archbishop Eamon Martin paid tribute to Archbishop Brown for having “travelled the length and breadth of the island” in the service of the Holy See.

“Since arriving in Ireland in January 2012 as Apostolic Nuncio, Archbishop Charles Brown has endeared himself to so many people in Ireland,” Archbishop Martin said.

“Thanks to his ‘down to Earth’ and friendly nature, many Irish people have had the opportunity to meet with the ‘Pope’s ambassador’ and chat to him about the living Church in Ireland. I know that he has very much appreciated and valued this interaction.”

Dr Martin also referred to Archbishop Brown’s Irish ancestry which he said gave him “an innate interest and understanding of so many aspects of the Church here” and that “in a short space of time he got to know the issues and struggles of the Church in Ireland and was able to affirm and encourage countless people, religious, priests and parish workers.”

In a personal tribute the Primate of All Ireland said, “For me, his energy, courtesy, openness, warmth and cooperativeness have exemplified the style of Pope Francis. I will miss him personally and I thank him for his generous service here in Ireland. I wish Archbishop Brown well and assure him of our prayers in his future posting.”

The Bishop of Elphin was another who paid tribute to the Nuncio, saying that over the past five years the former Congregation for the Doctrine of the Faith official “challenged us and encouraged us in equal measure”.

In a statement, Bishop Kevin Doran recalled that he first met Archbishop Brown when he came to visit the staff at the 50th International Eucharistic Congress office, shortly after his appointment to Ireland.

“During that busy period he was very supportive to us and was ready to do anything he could to help. In much the same way, around the time of my appointment as a bishop, I found him very approachable and encouraging. He has visited the Diocese of Elphin on five or six occasions over the past three years and always seemed to have plenty of time to meet people, young and old alike.”

According to Bishop Doran, Archbishop Brown “came among us as a diplomat, at a time when diplomacy was really needed, but he came with the heart of a pastor”.

Elsewhere, the Bishop of Elphin said Archbishop Brown had devoted a significant amount of energy to the renewal of the Episcopal Conference.

“In the past five years, eleven Episcopal appointments have been made in Ireland and the process is under way for seven more. This work will have to be completed on someone else’s watch, but that is the nature of the Church.”

He concluded by saying that while he was sorry that Archbishop Brown would soon be leaving Ireland, he was delighted that the Catholics of Albania, who have suffered so much in the past, will have him among them as the personal representative of Pope Francis.

“I wish him every blessing in his new mission and hope that he will occasionally return to visit us.”

However, not everyone expressed sadness at the news. Censured Redemptorist priest Fr Tony Flannery recalled that the Nuncio had refused to have any dialogue or meetings with the more liberal section of the Irish Church, or to attend any of their events.

Describing the American prelate as “personable, friendly”, he said he got on well with people at that level.

“He made himself freely available at the more traditional type of religious events, e.g. Knock and novenas,” Fr Flannery said, and added that the Nuncio was “selective in who he dialogued with, and kept well away from those who might disagree with him”.

He added, “His biggest failure was in his policy of appointing bishops. He had a minimum of consultation, and only with the safest section of the Church, and as a consequence many of his appointments are not showing the openness and courage of Pope Francis.”

Speaking to Catholicireland.net, Archbishop Brown said, “If I could speak very personally, next week will be the sixth St Patrick’s Day which I have celebrated in Ireland since arriving back in January 2012, and sadly for me, it will be my last St Patrick’s Day in Ireland, as Pope Francis has appointed me Apostolic Nuncio to Albania.

“Of course, I look forward with real enthusiasm to my new mission: to be a Nuncio is to be a missionary, sent by the Holy Father. But I am sad to leave Ireland, where I have met so many wonderful people, and have made so many friends in every part of this beautiful island.

“And so, to everyone in Ireland I just want to say a massive ‘thank you’ for the way you received and welcomed me in these years. You made me feel that I was at home. And I will never forget that. God bless you, and please pray for me.”