Vanessa Redgrave delivers letter to No 10 on lone child refugees 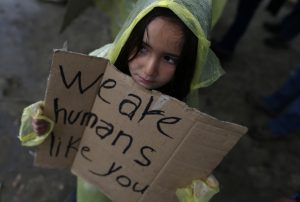 Vanessa Redgrave, Lord Alf Dubs and Aislin McGuckin on Friday delivered a letter to Downing Street calling for an immediate amnesty for the unaccompanied minors in Calais identified by Citizens UK as having family in the UK.

This action follows Wednesday’s Home Affairs Committee report, Migration Crisis, which called for the 157 unaccompanied minors in Calais identified by Citizens UK to be brought to the UK in a one-off amnesty.

Citizens UK have been in Calais working with unaccompanied child refugees who have family in the UK since last year.

In that time they have reunited over 40 children with their UK-based families, however, lawyers report that the process is still taking far too long. On average, three children a week are being reunited.

This week, Citizens UK revealed that there are currently 170 children in Calais who have close family in the UK, and at the current rate of reunification, many will face another winter in Calais.

Lord Dubs said: “It is vital that the UK Government shows strong moral leadership in this situation.”

“The only reason that the 170 children identified by Citizens UK are still in Calais is lack of political will. They have every legal and moral right to be with their families in the UK. It is shameful that they remain stuck in a field, between two of the world’s richest countries, surrounded by strangers.”

So far Citizens UK’s efforts to persuade councils to participate in resettling Syrian refugees have persuaded 44 councils to offer 3,097 places.

They’ve identified 700 private landlords who are offering properties, persuaded a dozen universities to offer £3.5 million of scholarships for refugees and successfully challenged the Prime Minister to resettle at least 1,000 people before Christmas.

Citizens UK has established Safe Passage; a group of volunteer lawyers, interpreters and refugee charity specialists who are setting up a process so that those who have a good legal right to claim asylum in the UK may do so.

They have launched an emergency fund to raise money to help unaccompanied minors escape the immediate threat of demolition of the Calais camp.

The text of the letter:

For the Attention of Mrs Theresa May, 10 Downing Street, London.

We are writing to request your urgent intervention on behalf of the refugee children in Calais. Latest figures from Citizens UK suggest there are 170 children in Calais with a right to relocate to Britain in order to reunite with their families.

The dangers facing these children are well documented and urgent. Their fears, as documented recently by UNICEF include “violence displayed by the police, civilian militias and traffickers, as well as sexual assault committed against both girls and boys”.

During your time as Home Secretary you led, worldwide, efforts to tackle modern day slavery and the evils of sexual abuse and exploitation of innocent people.

We were delighted to see from your announcement earlier this week that you will continue to show this leadership now as Prime Minister. It is in that spirit that we ask for your urgent intervention in Calais.

If the rights of these children are not upheld they are left with an appalling choice between train tracks on the one hand, and the very traffickers you have challenged every step of your career since you became Home Secretary in 2010.

Two children have died in the hands of these traffickers in the past six months, children who should have had safe and legal passage to the United Kingdom.

Reports of children being forced to indenture themselves or prostitute themselves for passage to Britain are on the rise and with the prospect of further demolitions in Calais the context could not be more urgent.

That is why we are asking you to intervene to ensure that all eligible children are identified, supported, and transferred by the British and French authorities with all possible haste.

Ensuring, as your government is now working to, that family reunion provisions are active from the frontier of Europe should stop the flow of desperate children to Calais.

The ones who are there already must not be forgotten, punished, or lost. I deeply hope that your government may show more humanity and intelligence than the Chamberlain government showed to the Jewish people until after Kristallnacht in mid- November 1938.