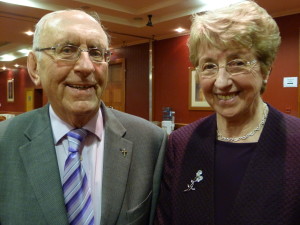 Elderly Religious are going through a “very difficult time” as they cope with old age, sickness, no vocations, the closutre of convents and monasteries and the negative reaction to the revelations of clerical and institutional abuse.

A conference held in Dublin on Friday heard Sr Kathleen Maguire, PBVM, warn of the difficulties an increasingly large number of aging Religious are experiencing.

She also related her experience of hearing people shout abuse at a group of priests on the street.

Sr Kathleen was addressing 204 elderly priests, nuns and brothers at the ‘Valuing the Giftedness of Elderly Religious’.

The group of priests “had nothing to do with the scandals, but we’ve all been tarred by them,” she explained.

She asked those at the conference to reflect on their giftedness and the “greatest gift if all – of being called by God to live such a way of life.”

The attendees were given practical advice on getting their community to value them. If we want to be understood and forgiven, then we must make very sure that we do the same for others. Every right has a corresponding duty.” Sr Kathleen said.

Referring to the challenges to Religious and religious life today, Sr Kathleen said it was important for Irish society to remember that the scandals were caused by the few. “Unfortunately we are all inclined to be tarred with the same brush – and that is what pains us.”

She also reminded conference delegates that the Apostles went through a tough time on the sea with Jesus who was fast asleep when a storm grew up. The Apostles reacted by crying out to Jesus and asking him if he did not care that they were all going to drown.

“We are being pruned like the rose tree – like any tree that has to have new life,” the Presentation Sister said.

Speaking to CatholicIreland.net after the conference, Sr Kathleen said that while some might accuse her of blowing a trumpet on behalf of the Religious, she responded, “It is about time we did, we have been receiving all this flack over all the bad things and nobody seems to be coming up with the tremendous amount of work that has been done by the Religious.”

Spiritan, Fr Tony Byrne also addressed the conference. Both he and Sr Kathleen are well known for the courses they run on bullying.

Speaking after the conference to CatholicIreland.net, Fr Byrne called on religious congregations to check whether their many elderly nuns and priests are being subjected to abuse and bullying in their retirement homes.

The author of a number of books on bullying said that families and religious communities need to ensure that retirement homes operate an anti-bullying charter.

In his address, the former missionary cited figures which show that over the past two years there have been 4,152 referrals of elder abuse and bullying to the HSE.

Speaking afterwards, he said he has rarely gone into a retirement home where he has seen an anti-bullying charter displayed.

“The charter is supposed to be there for the residents. It should also be there for those employed in these homes as a requirement of their contract, stating that they will follow the procedures outlined in the charter.”

The 82-year-old said bullying could also occur between one retired person and another, as well as between staff and residents.

“I think in general the elderly in these homes live in a culture of silence about abuse because they fear that if they talk about it they may be thrown out and looked on as trouble-makers.”

Living in the midst of a “disposable society”, Fr Byrne said it was important for elderly religious to hear that they still have a role in that society and in the church.

“They have a role to play, an experience to tell, and a story to tell. They can do something still. They shouldn’t be regarded as passive members of any organisation – they should be respected. But they are not always respected,” he warned.

He also called for elderly religious to be respected for their example of a long life of commitment to their calling and their loyalty which he said should be recognised and admired.

Describing himself as very pleased with the conference, which was also addressed by clinical psychologist, Dr Marie Murray and Abbot Mark Patrick Hederman of Glenstal, Fr Byrne said that the conference programme had already been given successfully in Scotland and would be offered elsewhere in the UK and Ireland on invitation.