Home > Featured > “Use it or lose” it says homeless campaigner 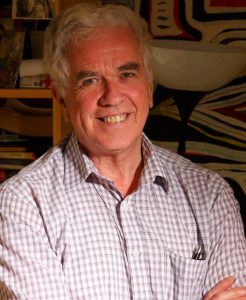 Jesuit homeless campaigner Fr Peter McVerry has called for more compulsory purchase orders on vacant properties and a suspension of evictions for three years, and has said he supports the current ‘Take back the city’ protests, once they are not violent and do not damage property.

“We have an emergency, a crisis. In an emergency you take emergency action,” said Fr McVerry, speaking on RTÉ’s Today with Sean O’Rourke.

Fr McVerry said that while he supports the protests, he abhors all violence. “It’s totally unacceptable and counterproductive, because the focus for the last few days has been on the violence surrounding the eviction of those who were occupying the building. The focus shouldn’t be on the violence. The focus should be on the failure of government policy to address this issue.”

Last Wednesday, protesters demonstrated over the eviction of people from a building subject to a repossession order, blocking the streets between Dublin’s Parnell Street and O’Connell Street.

“I would much prefer the government to be occupying these buildings rather than the public. The government should be in there compulsorily purchasing empty buildings.” The occupation was arising out of total frustration, said the Jesuit.

“Young people today in their 20s and 30s, they were told by these politicians that if they went to school, studied hard, got a good Leaving Certificate, went to college and got a good degree, that Ireland would look after them. And they’ve done all that and where have they ended up? They can’t leave their parents’ home because they can’t afford to. They’re paying exorbitant rents. They can never dream of owning their own house or they have to emigrate, so they are totally frustrated.”

The government has to recognise, he continued, that saying he believed the ‘occupy movements’ would spiral. “I can see 50, 100 properties around the country being occupied simultaneously and then there’s nothing they can do about it.”

Minister of State for Housing, Damien English, speaking on the same programme, condemned the behaviour of protesters occupying vacant properties, describing it as “disgraceful”. He said their action was “criminal activity” and Fr McVerry should not encourage such behaviour.

Instead the Minister encouraged protesters to engage with and promote schemes which help to identify vacant properties and return them to use. Deputy English said the government was trying to use a carrot and stick policy – the carrot being the “generous” ‘Repair and Lease back’ scheme, and the stick being compulsory purchase orders (CPOs,) but CPOs were “not straightforward,” he said. “We have to go street by street, house by house and convince them to take on the scheme,” he said. “They do not always give a quick win.” 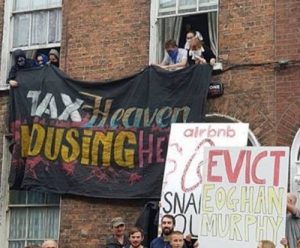 Take back the city protest

Countering this, Fr McVerry said that the government had no difficulty using CPOs if a motorway was involved or it was land for the land agency. “They blithely talk about compulsory purchase when it suits them.”

Pointing to the success of Louth County Council, which has acquired between 80 and 90 properties through CPOs in a year, Fr McVerry said that the Minister should be saying to every local authority: “Look at what Louth have done and do it.”

The campaigner for the homeless said that sometimes owners left their properties unoccupied as house prices rose so they would make more money. “That in my mind is corruption,” he added.

“The important thing is to bring these properties back into use one way or another,” he said. If owners were not prepared to do that, they should lose the property. “You use it or you lose it,” said Fr McVerry.